Super geeky marriage proposals are becoming increasingly popular everyday. We recently covered Charlie proposing to his girlfriend with an iPhone and a group of Asians custom-programming smartphones to make them say “I <3 U” and now this. 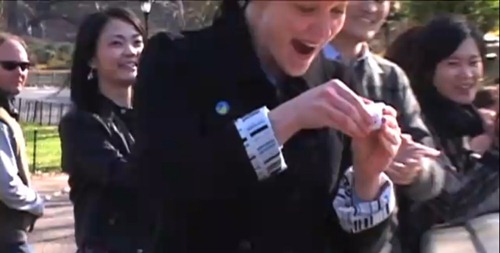 Frank has enjoyed a lovely two-year relationship with girlfriend Kasey and doesn’t want to “wait any longer”. So Frank and a few friends pull off a surprise proposal at Kasey’s favorite place in New York (a bridge in Central Park) with her favorite tune (Stand By Me by Eric Clapton) being played by a live band. A couple of minutes later, Frank passes from under the bridge and proposes to Kasey from a friggin’ rowboat and, of course, receives a resounding “OH MA GAWD, YES!” in return for his valiant geeky efforts.

It looks more like an Apple advertisement than a straight-up proposal to me, though. I’m pretty sure Frank and his pals could have skipped the trouble of making custom camera apps for “surveillance”. Instead, opting for surveillance with the standard eye would have probably sufficed without ruining the surprise.

But hey, no reason to get worked up over a proposal, right? Congratulations Frank and Kasey, may your love be forever strong!

In case you didn’t notice yet, the video is embedded below: