This Chocolate Covered iPad Idea Can Make You the Best Boyfriend / Husband Ever !

It was indeed very sweet and thoughtful of Stefan Magdalinski, a guy from South Africa to come up with this great idea of wrapping an iPad in a chocolate bar, on the eve of his beloved wife’s birthday. The guy in fact shot two birds with one stone. His wife is not only a chocolate lover, but also a great Apple fan too! And so he not only gave her that big 1.5 lbs chocolate bar which she loves to eat, but also Apple iPad all the way from London (iPad is not available in South Africa yet) which she always wanted. 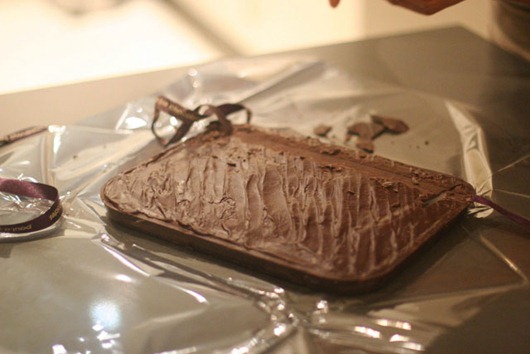 The entire story, as explained by Stefan on his blog:

Anyone who knows my wife, @kerrching, knows that she’s a Apple nut. Also, with a June birthday, she has conveniently positioned herself perfectly for the Apple release cycle. An iPad was inevitable for her birthday, but I knew that if I just delivered a wrapped box, there wouldn’t be much of a surprise. Where’s the fun in that? So I rang my friends James and Paul, who happens to run the finest chocolate shop in London, and said “Could you freeze an iPad in chocolate carbonite, and have it survive?”. They weren’t sure, but were willing to give it a go. Additionally, iPads aren’t available yet in South Africa, so it had to smuggled over from London, without Kay finding out what was going on.

and finally, the pictures..

The “I like chocolate, but you gave me 2 kg of it for my birthday, are you a bit nuts? look”:

Why don’t you pull on that little ribbon embedded in the chocolate?

The iPad as you can see was in perfect condition, with that chocolate coating as an extra layer of caring thought, extra kindness, sweetness and deep love from her husband. [via Gizmodo]