Security cameras are commonplace these days, and while they may have previously only been in offices and businesses, homes around the globe now have cameras that connect to smartphones and websites, allowing constant monitoring of just about anything.

Live streaming security footage from a car has been less popular, or at least less common, with one new startup aiming to change that. Owl, a company founded by an Apple iPod veteran, has announced the Owl Car Cam, a security camera for the car. 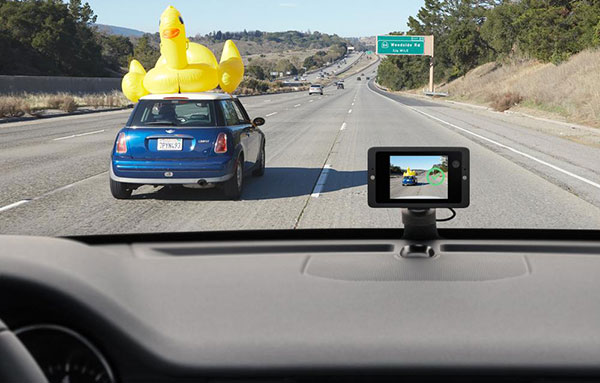 The Owl Car Cam is a simple enough piece of hardware. With both front and rear facing cameras, the unit has its own AT&T 4G connection for streaming to the outside world. By connecting to your car’s onboard diagnostics port, the Owl Car Cam gets power without needing to be removed to have a battery charged, and it is capable of capturing 1440p/720p video with 480p live streaming supported as well. A companion app allows users to access up to 24 hours of video footage, meaning the video should be safe and sound in case you need to refer to it for whatever reason.

There’s a 2.4-inch screen on the device itself, showing what it is recording at any one time, and there are a couple of LED lights that are supposed to act as a deterrent, although we wonder whether they will just draw attention to something thieves may target. If something does happen, the Owl Car Cam can send you alerts so you know about it, too.

Founded by Andy Hodge, a man who managed the iPod product development for a decade at Apple before leaving for Dropcam, Owl will sell its camera for $299 with connectivity to AT&T’s network costing an additional $10 per month. However, there will also be a $349 bundle that will include a camera and a year’s 4G coverage thrown in. You can pre-order now from owlcam.com, with delivery expected by the end of the month.