When Apple’s engineers were working their backsides off to get 3D Touch ready for the iPhone 6s and iPhone 6s Plus, we doubt that their main consideration was whether people would be able to weigh fruit or any other object with this thing. Yet, that’s exactly what it turns out you can do with a new app now available that uses the wonder of 3D Touch to compare two plums, telling users which is the heaviest.

For those who aren’t up to speed on their iPhone technologies, 3D Touch allows the iPhone 6s and iPhone 6s Plus to sense the force with which a user is pressing on the screen. That’s great for keeping extra options and menus behind a stronger button press, but we very much doubt 3D Touch was ever designed for weighing plums. Or any other fruit for that matter. 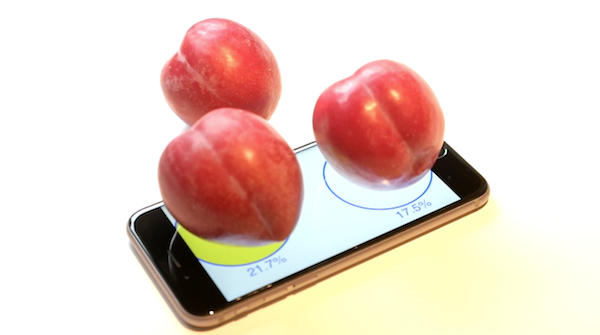 Whenever I pull a pair of plums from the freshly delivered Fortnum & Mason’s hamper, I always try to ensure she has the larger of the two. However, this isn’t always easy, especially after the third of fourth breakfast cocktail.

3D Touch to the rescue! My latest app, the Plum-O-Meter, has been specifically designed to solve this problem. Simply place two delicious plums on the iPhone’s screen and the heavier of the two is highlighted in yellow so you can hand it to your beloved without fear of being thought of as a greedy-gut

Well, we never thought we’d be putting foodstuffs on our smartphones to measure which is the heaviest, but here we are.

Unfortunately, the Plum-O-Meter app makes use of private APIs to achieve this, which means it will only work on the jailbroken iPhones. The source is available on GitHub for those who are interested in trying it out.

Watch the video below to see it in action.

If you ever find yourself in a position where you need to measure which of your plums is the largest, then now you know how to do it.