If you’ve been hankering after some new iPad benchmarks, then today is your lucky day after one of the tablets found its way into the hands of someone who just had to do the right thing – run some benchmarks on it.

We’re less than a week post new iPad announcement, but while many of us are still sat refreshing web pages in the hope that an early delivery will occur, some lucky people have already gotten their sticky little mitts on the tablet in question.

While some are impatiently awaiting Friday’s release of the new iPad in order to take their place in line, it appears that the device is already being tested by some lucky folks over in Vietnam. Upon getting hold of Apple’s latest tablet and possibly the most sought-after device of the year so far, they did what any self-respecting geek would do: benchmark the bejeesus out of it.

The results are your standard fare, though there are a couple of interesting little tidbits to be gleaned from the results posted by the iPad owners. One confirms a rumor, while the other quashes one.

First, we’ve now got confirmation that the new, third generation iPad sports 1GB of RAM, just as previous rumors had hinted. It makes sense to double the iPad 2’s quota in order to provide enough oomph for the textures required by that super high-resolution display that we are all so giddy about. 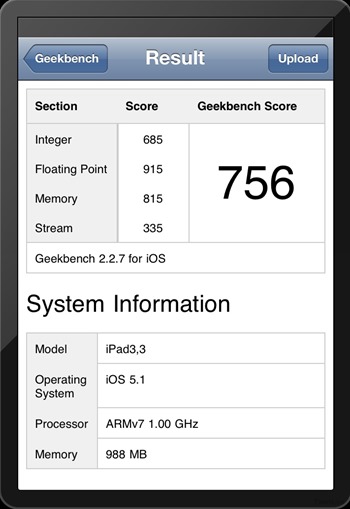 That’s the good news. The bad news, if you can really call it that, is that the new iPad only sports the same 1GHz CPU as the iPad 2. We’re not going to lose too much sleep over that because, in all honesty, the iPad 2 isn’t exactly a slouch when it comes to launching apps and then keeping them happy once it has. Yes, a speed bump would have been nice, but it appears that those rumors were unfortunately inaccurate. You can’t have it all!

The full suite of results can be checked out by hitting up the chaps that ran the benchmarks, and if you’re of the geeky persuasion then they will probably make for some interesting reading.

Us? We’re just excited to see that Retina Display in action, whatever the innards that are sat beneath it.