If you’ve ever wondered what type of face you pull when chugging down Coca-Cola’s sweet, sugary carbonated beverage, then wonder no more.

After noticing what the company feels to be a gap in the market for novelty drink experiences, the Israeli arm of the business has invented and released the ‘selfie bottle’ in conjunction with innovation agency Gefen Team, as part of a promotion for Israel’s Summer Love brand event.

Rather than looking to be a route that Coca-Cola will go down on a worldwide scale, the ‘selfie bottle’ has been developed and produced in line with Gefen Team, an innovation agency that looks to creatively solve business challenges, based in Israel. We’re not exactly sure what the challenges were in this instance, but the solution to said challenge appears to be a Coca-Cola bottle with a selfie camera attachment on the bottom that snaps an image of the consumer when the bottle is sipped from at a certain tilted angle.

You may be thinking what exactly is the point of having a Coca-Cola bottle that snaps a drinking selfie and then performs no further task? Well, that’s also been thought of by the two companies involved.

As you might expect, the resulting selfies can be shared to a variety of social networks, including Snapchat, Facebook and, of course, the king of the photo sharing sites, Instagram.

From the perspective of trying to keep event attendees more engaged and active, the new selfie bottle appears to be having the desired effect:

Users tag themselves and their friends in photos on Coca-Cola’s social media assets. It really does the trick and makes the party-goers more present and active during the event, knowing they can share their special moments just by drinking. 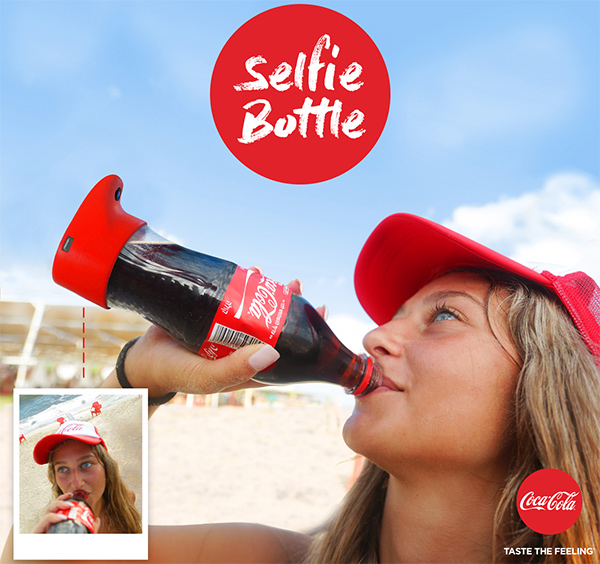 The social aspect of the Coca-Cola selfie bottle is clearly there for all to see. From a hardware perspective, the bottle is fitted with a camera at its base, and comes with a built-in sensor that is set to detect when the bottle is tilted to the magic 70-degree angle. When that point has been reached, the bottle kicks into life and snaps a glorious selfie of the lucky individual slurping down some of Coca-Cola’s black magic.

It’s unlikely that we will see this initiative role out globally, but it’s still extremely interesting to see companies like Coca-Cola trying out these new tricks to engage consumers.