Tesla has today begun to push the new and enhanced Autopilot update out to cars equipped with the HW2 hardware, which is to say those with updated sensor and computing hardware that Tesla designed to provide full self-driving capabilities at some point in the future.

All cars with the HW2 hardware, which includes Model S and Model X vehicles, will receive the update in due course. A subset of drivers – around a thousand – have been using the software for a couple of weeks now in order to verify everything is as it should be, with Tesla’s Elon Musk confirming that a new release had been pushed out to those users recently.

While drivers of HW2-equipped cars can look forward to their automobile automatically downloading the software, Musk has confirmed that it will be in “non-actuating mode” initially in order to further confirm reliability, though he does expect actuation by the end of this week.

Whilst no release notes are yet available for the newly updated Tesla software, those who owned one of the thousand test cars received the following a couple weeks ago:

We’ve designed these new Autopilot features to give you more confidence behind the wheel, increase your safety on the road, and make driving in traffic less frustrating. Similar to the autopilot function in airplanes, you need to maintain control and responsibility of your vehicle while enjoying the convenience of Autopilot in Model S.

These features operate on a new hardware and software platform. Therefore, their rollout will be measured and cautious until we have generated confidence across several hundred million miles of real-world usage. Enhanced Autopilot will become better over time as this experience is gained and corner cases are addressed. In the meantime, it is particularly important that you remain vigilant and in control when using driver assistance features.

If everything goes according to plan and Tesla flicks the switch that enables everything for everyone later this week, there could be some very excitable Tesla owners out there. It’s probably a good thing their cars will almost drive themselves, then! 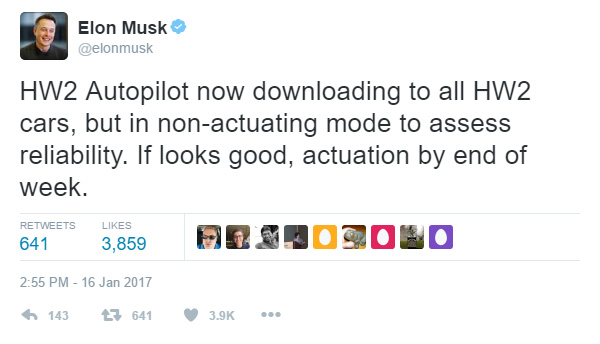