Take Control Of Your iMessage Privacy With ‘SafeTexting’ Jailbreak Tweak

Apple’s iMessage, like so many other instant messaging solutions, sends read receipts to those who have sent you messages. The idea is that everyone can see when their messages have been read by the receiving party which should mean you no longer have to wonder whether your message was received or not. It’s a great feature, but it can have its problems.

As some people have found out, having read receipts go to the person who just sent you a message means that a clock was just started, ticking along until you reply. If you take too long, the person waiting for that reply might get annoyed, and we’ve all been sat waiting for a message that never comes – it’s irritating at the best of times, but when you know for sure your original message has been read, it’s maddening.

If you’re jailbroken though, a tweak called SafeTexting might be able to help you out. Once installed in exchange for $1.00, the tweak will stop read receipts being sent out until you actually reply to the message. That means that until you’re ready to respond, the person who sent you the original message will never know that it was read. Where this differs from simply turning read receipts off in the iMessage settings is that the read receipt will be sent along with the next reply, giving the illusion that you are replying as soon as you read the original message. Sly, indeed. 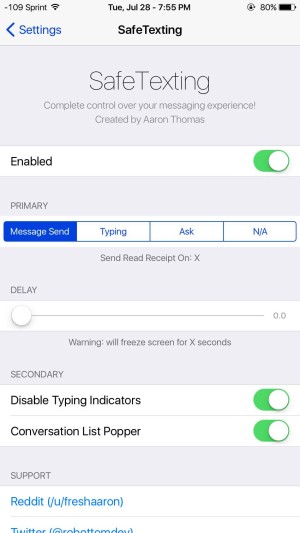 While that may not be the greatest feature around though, SafeTexting also allows users to turn off the bubble (typing indicator) that appears when someone is typing inside iMessage. As a user with SafeTexting installed, you will still be able to see when incoming messages feature someone who is typing, but the other half of the conversation will have no idea when you are typing. If you like the idea of seeing when someone is typing but don’t want them to be able to see when it’s the other way around, then a dollar might not be too much to pay.

SafeTexting can be installed via the BigBoss repo in Cydia. Extra features are said to be on their way to the tweak too, though we’re not quite sure what they will be or when they will arrive.