I’m a big fan of music discovery services but, unfortunately, the most popular ones like Pandora, Spotify, last.FM don’t work outside a handful of supported countries where streaming music from big music labels is allowed. Outside these countries, you have services like GrooveShark which, really, is the poor man’s Spotify. There is, however, one not-so-famous service that not only works outside the USA and Europe but also offers excellent music discovery features for free. 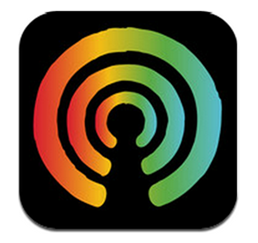 The service in question is Stereomood. Stereomood suggests high-quality music based on your mood. Whether its happy or melancholy, studying or lost in thought (which is the same thing, really), they’ve got it all covered!

I’ve been using their desktop-based for many months now. Whenever I get tired of listening to the same songs over and over again, I just visit Stereomood.com, start a mood radio channel based on whatever mood I’m in at that time and voila! I discover a bunch of awesome new tracks.

Now, the only thing missing was the lack of a good mobile app. Earlier this week, Stereomood released one and it is spectacular. 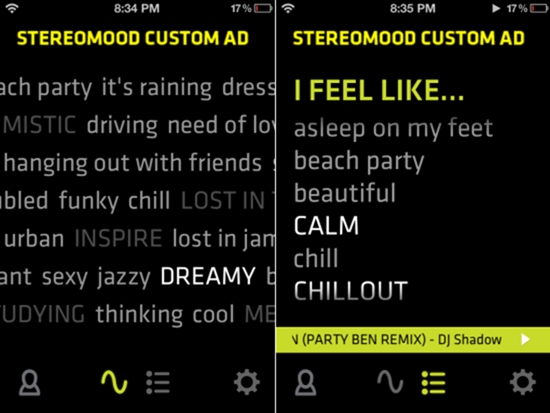 Launching the app for the first time presents the user with the option to login/signup via Facebook or through the traditional email way. Once past that, you can choose from any of the mood-based “radio channels”.

These channels are shown going left and right in seven different rows. Certainly not the best way to display channels, but that isn’t a problem since the app lets you change that from the same menu. Tapping a mood takes you to the music player where you tap the play button to start your mood playlist. 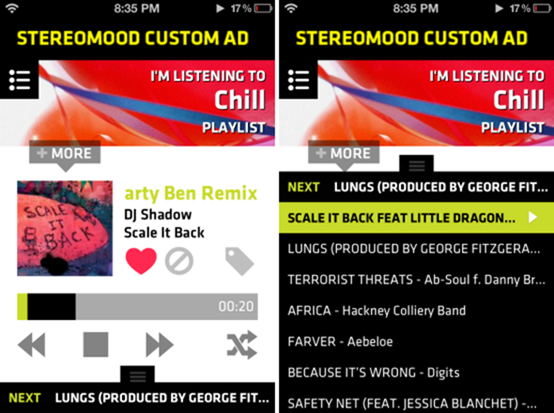 From the music player, you have your standard controls – play previous/next, play/stop, shuffle – along with two extra Stereomood-specific buttons: like and block. Unlike most other music services, you can have a look at upcoming songs in your playlist by simply swiping up from the bottom. Furthermore, you can tap the +More button above the album cover to buy the track, get more information about, share it on Facebook/Twitter/Email so others can check out the rad song you’re listening to.

Tagging is an important part of Stereomood. Every song you listen to has already been tagged by someone and, resultantly, appears in that mood playlist. You can help the Stereomood community by tagging tracks yourself from the music player. 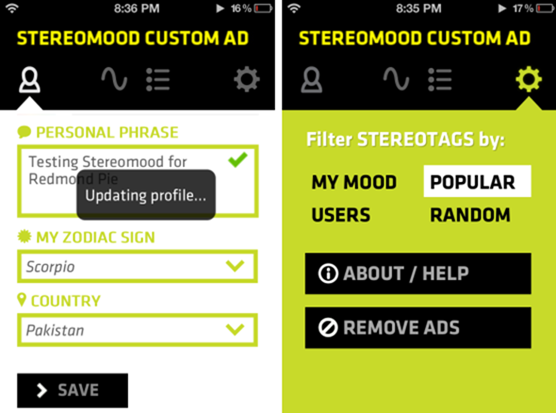 The app is available for free on Android and iOS devices. It is ad-supported but you can remove them by buying the developers a cup of coffee with a $0.99 in-app purchase.