There’s no doubting the massive increase in Apple since the introduction of the iPhone back in 2007, but even if you’ve been an avid follower since the early days, a relatively new App Store app aims to test even the most knowledgeable Cupertino enthusiast.

Set on a background of ambient music, it really pits your wits with some particularly difficult questions in categories from software such as native Macintosh features, to hardware, to history, and, of course, the people who made it all happen. 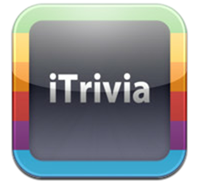 Some of the questions are pretty entertaining, and one which had me chuckling regarded the very first Apple logo. With four options, I was pretty sure "a silhouette of Steve Wozniak" would have been the wrong answer, although my lack of in-depth knowledge was still exposed on 7 out of the 10 questions, I’m ashamed to reveal.

With such a poor score, the app offered a little banter in the form of "do you still use dial-up?" while my ‘Apple Knowledge Quotient’ stood at a miserly 0.6% after my first try.

Given that I’ve actually read the Steve Jobs biography by Walter Isaacson, I would have hoped to have fared a little better. Sure, the book didn’t have the biting edge we were all hoping for, but there was enough in there to see me through the iTrivia quiz – at least, I thought.

Having given it a couple more tries, I’m pleased to report that my score has improved, and, perhaps more importantly to you guys, the quiz has good replay value. For 99 cents, it will certainly give you a good go-to for handy-to-know Apple Trivia, and is as fun as it is severely challenging.

To add a little competitive edge, it took me some five tries to finally get a ten out of ten score.. do you think you can beat it? Well download the app via the link below, and be sure to leave your comments on our Google+ or Facebook fan pages!

Download iTrivia: All about Apple for iPhone, iPad and iPod touch [iTunes link]