Sure, after years in existence, the jailbreak scene has grown and expanded to the point where Cydia harbors thousands of useful, enhancing tweaks for iOS-lovers far and wide. But only an elite few have grown to become part of the furniture as fair as jailbreakers are concerned, and along with the likes of BiteSMS and the now somewhat unneeded SBSettings (thanks, Control Center), Springtomize has grown to become the ultimate all-in-one hub for those looking to mod and theme the look and feel of iOS. Now, the guy behind it, Filippo Bigarella, has revealed that an iOS 7-tailored Springtomize 3 is on the horizon, and if it can continue in the same vein as the two versions preceding, jailbreak lovers are in for quite a treat.

Springtomize, much to the display of some other developers, actually nullified dozens of other tweaks when it first made its entrance to the jailbreak scene. Shrink, for example, was a paid app allowing users to resize home screen icons without distortion, and for those who found the stock app faces to be somewhat obese, it was a godsend. But in came Springtomize, which offered this service, among many others, as standard, and Shrink essentially died.

Whether you’re looking to resize icons, alter their opacity, tweak the lock screen or meddle with the status bar, there’s not a great deal that Springtomize doesn’t cover. Not great news for makers of smaller tweaks, of course, but great for those of us who may be wary of lagging our devices up with hundreds of (often conflicting) tweaks.

Considering how smooth and easy-to-operate the first two versions of Springtomize have been, we’d expect nothing less from the third edition, either. Bigarella has a knack for making great tweaks, and as far as modding your jailbroken device’s interface, you’re not going to find a better all-rounder than Springtomize. 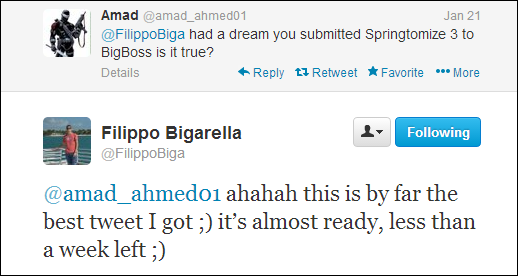 We will let you know just as soon as Springtomize 3 is released, as well as how to get it. It will certainly be a paid offering, but for a couple of bucks, will save you a lot of time and effort in the long run.