There’s been a lot of talk over the years about the hardware that Apple chooses to provide support for whenever a new major version of iOS is released. The Cupertino-based company has continually shown a desire to support as many legacy devices as possible whenever a new major version of its mobile platform is released. We’re currently on iOS 9, with hardware support ranging back all the way to the 2011 iPhone 4s, which shows the commitment Apple has towards supporting as many users as possible with new features and functionality. But, have you ever stopped to consider just how the various versions of iOS compare, tested on older hardware?

Luckily a newly released video shows exactly that by running iOS 5 all the way through to iOS 9 on a 2011 iPhone 4s to see the differences in performance. The video takes the opportunity to highlight the differences in performance on same hardware as iOS progressed over the years. This included focusing on very specific parts of the everyday user-experience, such as the boot up experience from a cold start, as well as testing how performant the app switcher is on the iPhone 4s across the five generations of the platform. 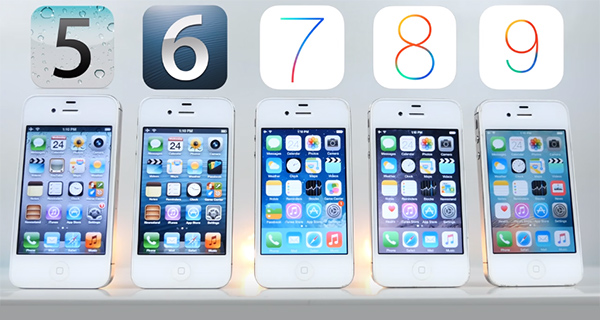 It also tests a number of features that have been becoming more and more popular, such as Spotlight Search, interaction with Apple’s digital assistant Siri, and the associated launch speeds of a number of apps that have become very popular on the iOS platform. Performance aside, it’s actually extremely interesting to see a number of iPhone 4s devices side-by-side that showcase the visual development of iOS over the years. Of course, this is about performance, and as you might expect, the later versions of iOS that have additional embedded features are noticeably slower to boot up and unable to provide a butter-smooth experience to the user.

There are certain aspects of the OS performance, such as launching the Settings app and scrolling the content, that isn’t hugely hindered by the fact that it’s running on older hardware. There’s however a noticeable lag in the scrolling performance when viewing tables, but largely speaking, the experience on iOS 5 against that of iOS 9 remains similar. It’s clear that Apple invests a lot of time and internal engineering resources into building iOS in such a manner that it remains usable and as performant as possible on older hardware. This experience doesn’t take into account the battery life of the phone however.

If you’re using an iPhone 4s, does this video give an accurate indication of your experience on the firmware version that you’re on?