Remember back in 1999 when Sony released the bizarre looking PocketStation accessory to accompany the original PlayStation? The creative little device featured an LCD display and was intended to be a combination based product that offered storage and personal digital assistant based functionality. The device never actually managed to see the light of day in the United States or Europe, partly because Sony used all available stock to satisfy demand in Japan and partly because it was killed off after three years. It seems that the PocketStation memory lives on not only in the thoughts of Sony but also in a second-generation form as a native app for Sony’s PlayStation Vita handheld.

When Sony published a rather perplexing teaser over the weekend, you didn’t really think they were going to attempt to penetrate the market with new PocketStation hardware, did you? The PocketStation was actually quite a well thought of device when it was released over a decade ago. In may look extremely dated and out-of-touch by today’s standards but users loved the ability to download accompanying mini-games that could be played on the device alongside the actual PlayStation One title. Rather than going through the pain of producing hardware, Sony has decided that a Vita app is the best way to try and replicate that PocketStation experience. 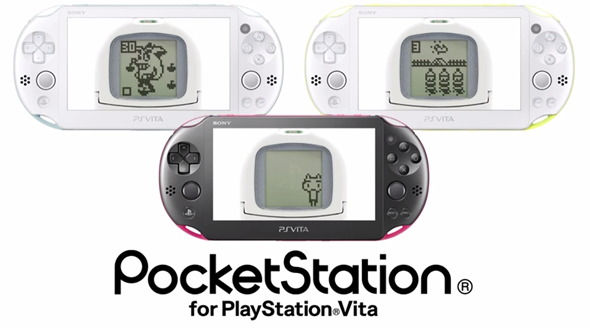 Starting today, PlayStation Plus subscribers will be able to download the new PocketStation Vita app entirely free. It will run as a native app on the Vita handheld and will feature mini-games from Crash Bandicoot 3, Ape Escape, Mega Man and a whole host of other classic games that will be more than familiar to PlayStation One fanatics. In addition to the initial launch titles, Sony will be also be adding a host of new content to the app on December 3rd, which incidentally is the same day that the new PocketStation app will become available to non PlayStation Plus members.

It’s highly likely that the new app will gain a lot of the popularity in Japan that the original PocketStation hardware enjoyed. We currently know that the initial launch will be limited to the Japanese market only, with no official word from Sony as to when, or even if, they will be opening the PocketStation app up  to additional territories this time around.