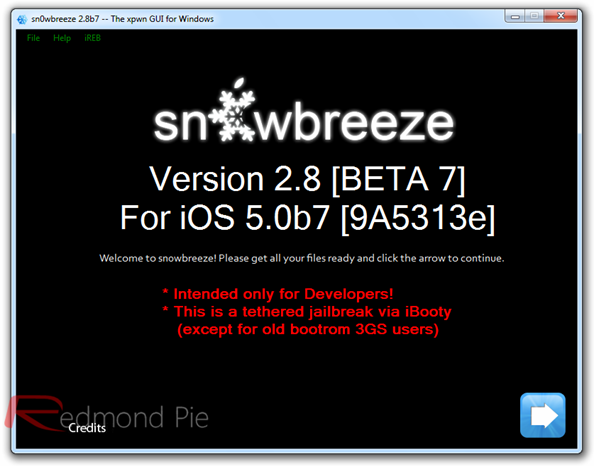 While Redsn0w 0.9.8b7 for both Windows and Mac can already jailbreak iOS 5 Beta 7, but for those of you who rely on a carrier unlock, iPhone developer and hacker iH8sn0w has just released Sn0wbreeze 2.8b7 for Windows which can not only jailbreak this latest version of iOS 5, but can also preserve the old baseband (hacktivation is also supported) on iPhone 4 and 3GS so that they can be unlocked using Ultrasn0w or Gevey SIM.

This version of Sn0wbreeze can also remove Beta expiry timer (by default, Beta 7 expires on October 20th) set by Apple, and UDID check so that those of you without Apple Developer account can install iOS 5 Beta 7 on any iPhone, iPad and iPod touch.

Change log of Sn0wbreeze 2.8b7 for Windows is as follows:

Instructions for jailbreaking are exactly similar to the last release. You can follow our complete step by step tutorial posted here to jailbreak iPhone 4, 3GS, iPad 1 (iPad 2 is not supported), and iPod touch using Sn0wbreeze for Windows.

As has been the case with all the current iOS 5 jailbreaks, Sn0wbreeze jailbreak is also limited to tethered boot only for all devices except for old bootrom iPhone 3GS, for which it is untethered. iOS 5 jailbreak on iPad 2 as previously mentioned is obviously not supported.

You can download iOS 5 Beta 7 from here, and iTunes 10.5 Beta 7 for both Windows and Mac from here.

Sn0wbreeze 2.8b7 for Windows can be downloaded from here.