Everyone loves a bit of privacy every now and then, and let’s face it, I am pretty sure that everyone has given their cell phone number out to someone that they later regretted giving it to for one reason or another. You would expect, that in this advanced day and age when smartphones play such an increasingly important and prominent role in our everyday lives, we would have a native filtering option on the device, or at very least our networks would be able to provide such a service.

Unfortunately the networks don’t have such a service and our smartphones can’t block incoming calls or messages for us, so that is where the likes of SMSNinja come in if you are fortunate enough to have a jailbroken iPhone but need to block people from contacting it. The app aims to be a highly effective firewall that allows the user to filter, block and hide things like incoming texts and media messages as well as phone calls. One of the things that actually makes this different from other software which offers similar functionality is that it actually allows rules to be set for messages that contain certain keywords, not just blocking every incoming message from a certain number like others.

SMSNinja has quite a substantial read me section which is a highly recommended read due to the complexity of the app. It essentially works around the premise of white and black lists that allow the user to define certain people or numbers that you want to either block from contacting them, or allow contacts if they seem fit. As well as being able to quickly set up these lists, SMSNinja also has a large settings section for users who want to get a little bit more advanced with their blocking and filtering. The settings allows the native Messages and Phone apps to be locked and password protected, meaning no outsider can access them. 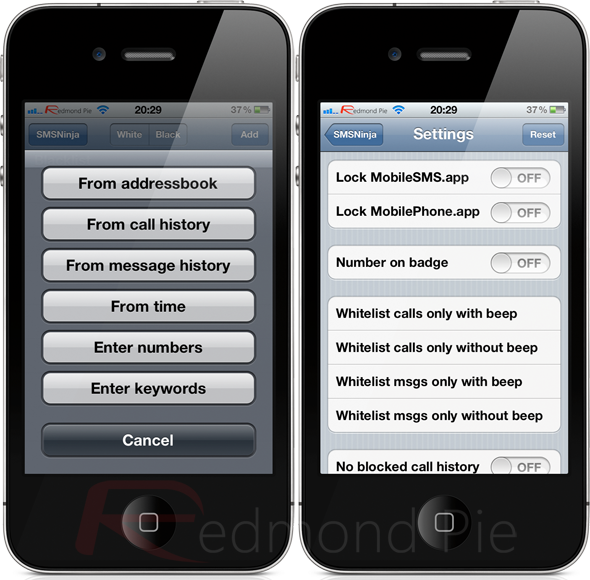 SMSNinja certainly seems to offer all of the functionality that one would need for blocking certain individuals from contacting them and can be downloaded free of charge from the ModMyi repository.