Smartwatches and fitness bands are all the rage right now, with large companies like Fitbit, Nike and Motorola throwing their hats into the ring in an effort to be the device that sits on your wrist and monitors your movement or, in the case of the more adventurous devices, acts as an extension of your smartphone.

But what if the wrist was the wrong place for such a device to live? What if it should be on your feet instead? 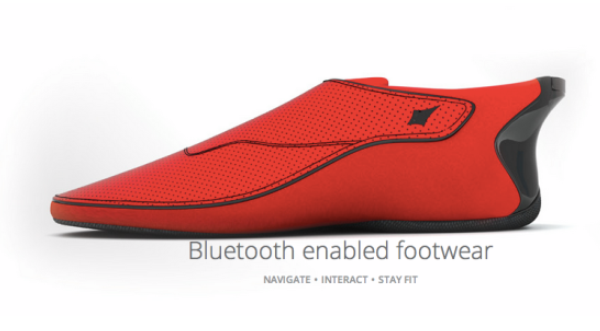 That’s what Indian firm Lechal is betting on with its so-called smart shoes. By connecting to your phone via the same Bluetooth connection everything else does, Lechal hopes that it can not just track your movement, but tell you where to go, too.

Using vibration motors, the smart shoes are able to direct runners, walkers, bike riders etc where to turn next. A vibration under your right foot means you need to turn right. If it’s your left foot that’s tingling, then you obviously need to turn left. The idea is that you can pre-program your shoes suing a smartphone app and the power of Google Maps and then put your phone away. Not having to look at a map to follow that route you pre-programmed. No running into street lights because you’re trying to fathom out your next turn.

While that’s interesting in itself, it’s the shoes’ fitness monitoring abilities that will interest most. Working like a Fitbit but with actual, accurate step counting, the shoes can track where you’ve been and how quickly you got there. It’s standard fitness tracking fare, but with the added bonus of, presumably, being more accurate than the competition.

Due for release in September, the shoes are expected to retail for a price that is comparable with existing running-wear, which can’t be bad really. There will also be an insole that can be used with standard shoes, should you so wish. Both use a rechargeable battery pack that can have its charge checked by clicking your fingers and having the battery feed back audibly. Perfect for when you’re out and about.

We’re not runners ourselves, but if we were, we’d be all over these!