When Apple announced the inclusion of Siri on the iPhone 4S during the October 4th special event, it was only going to be a matter of time until clever consumers and technical boffins alike demonstrated the true power and versatility of the Personal Assistant. 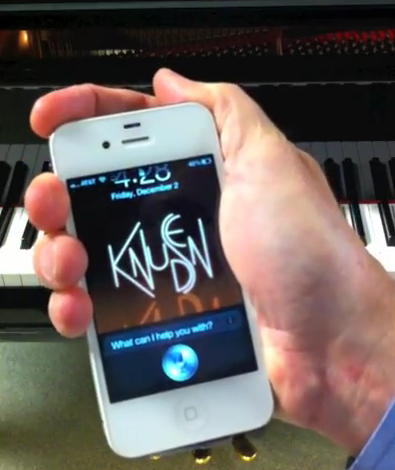 With most innovative devices and technologies, it isn’t long until somebody comes up with new mind blowing ways to use the functionality for previously never thought of uses. When Microsoft released the Kinect it was only a matter days before open source drivers were released to allow the motion capture device to be controlled via a PC rather than the intended Xbox 360.

In the following months saw numerous mods and alternative uses released for the device including navigating through Google Maps Street View and playing an augmented reality version of Tetris.

Step forward the good people at Yamaha who have pieced together a genius method to allow Siri to initiate playback of a requested song on a Yamaha Disklavier piano.

For those that don’t know, a Disklavier is  effectively a modern day piano that uses electromechanical solenoids and optical sensors connected to LEDs which allow them to play notes and use the piano pedals without the need for a human operator.

Yamaha engineers have combined the use of an iPhone 4S, Siri technology, an Apple Airport Express and one of their own Disklavier pianos to create possibly one of the greatest demonstrations of Siri’s power.

The playback is achieved by taking a standard MIDI song file and converting it to a recognized audio file, making sure that all of the MIDI data is preserved in the process.  The outputted audio file is then sent wirelessly from the iPhone 4S using Airplay technology to the Airport Express.

The next step is where the magic happens. The audio output of the Airport Express is connected to the analog MIDI inputs of the Disklavier piano using an everyday standard audio cable.  By activating Siri and requesting a song to be played the whole process is initiated, making the Disklavier’s keys and pedals begin movement, recreating the chosen song seamlessly.