Every time Apple releases a new smartphone, there’s always that feature thrown in to get chins wagging and kick up a little frenzy otherwise known as Apple Fever. This time around, it was the bright colors of the iPhone 5c; the fingerprint sensor of the iPhone 5s. Last year, it was the larger display of the iPhone 5, which finally broke the mold, but before that, the iPhone 4S got Siri.

It mightn’t have created the kind of impression Apple initially hoped, but its practical uses seem to have continued to thrive, and the Eyes Free technology aims to allow iPhone users to interact with their handset while keeping their retinas firmly on the road. General Motors has just announced that a series of production cars will be getting Siri Eyes free from next year, and if it catches on, should help make our roads that little bit safer for all.

According to an official announcement by GM, Siri’s Eyes-Free will hit the likes of the 2014 Chevrolet Camaro, Volt, Malibu, SS, Cruze and Equinox right off the bat, with a specially-designed button set to be integrated with the steering wheel. From there, one will be able to request directions, find amenities and enjoy all of the other benefits of a digital assistant whilst maintaining focus on the road ahead.

In an official press statement by GM, the company said that “easy, reliable and portable connectivity is a top priority for customers,” and that Siri will work in conjunction with the powers of MyLink technology already found in many production cars. 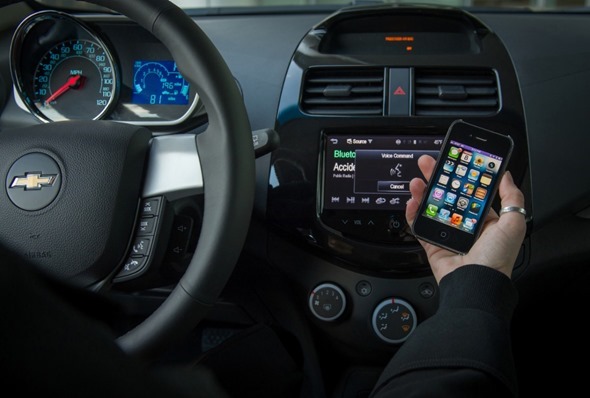 Smartphones have grown in popularity over the past decade, but while the level of functionality available at our fingertips is often useful, it is also at odds with those promoting the safety of road users. Many drivers still flagrantly break the law by using their smartphone to change a song, send a text, make a call, set a reminder, read a new notification or set up sat nav, but with Siri Eyes Free rising to prominence, those behind the wheel should soon have an alternative, safe means to stay connected and interact with their handset while driving from A to B.

We will update our readers once we have even more information regarding Siri Eyes Free, and its integration in other vehicles, so stay tuned.