Even though playing Angry Birds is seen almost as a rite of passage for all new smartphone users, maker Rovio’s presence in the world of entertainment now spans a far greater playing field than that very simple, addictive original title. Numerous spin-offs have ensued, and with products ranging from plush toys to phone cases and an Angry Birds movie in the pipeline, the Finnish outfit is easily among the most successful developers in mobile space. Today, the company has announced Angry Birds Go!, a racing game bringing Mario Kart-like fare to those annoyingly endearing little creatures. It will launch on December 11th, and we’ve got all of the details for your after the break!

Angry Birds Go! will be just the latest in a plethora of Angry Birds titles, but unlike the previous releases, there’ll be no throwing of any poultry, and (thankfully), no sneering green pigs to make you want to throw your device across the room. Instead, Angry Birds Go! is all about the racing, and although very similar to the likes of Mario Kart and Sonic All-Stars Racing, has its own unique quirks to it. 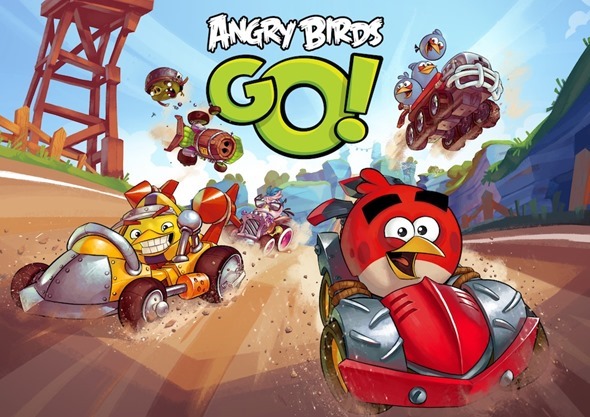 One thing to note about the title is that it will be a free release, and although this used to be a good thing for gamers, more and more companies are operating the freemium model. This means, for those unfamiliar, that while the title is free to download, the developer still generates revenue by means of in-app purchases, and although there is nothing wrong with this per se, often, such as the case with the Candy Crush Saga, there seems no end to how much the consumer will be shaken down for at a later date.

Still, hopefully Angry Birds Go! will offer as much fun as the many previous Angry Birds titles have, and with releases for Windows Phone 8 and BlackBerry 10 as well as the imposing presences of Android and iOS, everybody should be able to enjoy this fast and furious new adventure once it becomes available.

We’ll be sure to drop you guys a reminder when Angry Birds Go! has finally been readied for prime time, and in the meantime, you can check out the feature-length trailer below.