Regardless of you opinion on whether or not people should jailbreak their devices, one thing I’m sure we can all agree on is that we have seen the rise of some great development talent due to the community that has been created around the art of jailbreaking. The innovation, creativity and dedication that goes into producing some of the finest tools and utilities that exist within Cydia is commendable, even more so when you consider that a good proportion of them are available free of charge.

As with most walks of life, the individuals who are prepared to invest the time, effort and dedication to make something great are the ones who generally take the headlines. The same applies to the jailbreaking community, even though hundreds, if not thousands, of developers release work into the Cydia store, if I asked you to name a handful, the chances are people would produce the same names. One of those developers for me, is Yllier, who people may know from his release of Firewall iP and ScreenDimmer. Firewall iP blocks outgoing connections from the device, protecting apps, data and privacy and is billed as the only firewall available for the iPhone. ScreenDimmer, perhaps predictably, allows users to preserve battery life by automatically dimming the devices screen after a user defined set of time.

One of Yllier’s other tweaks that exists within Cydia is known as ‘Shake To Unlock’ and once again, no prizes for guessing what this tweak offers. With the recent release of version 1.09 the developer has extended the scope of this tweak to work with all devices running iOS 3.2 and above, which includes iOS 5. Shake To Unlock may seem like another simplistic tweak which has been thrown together, but upon closer inspection it actually has a very good feature set, making it a very accomplished and useful tool: 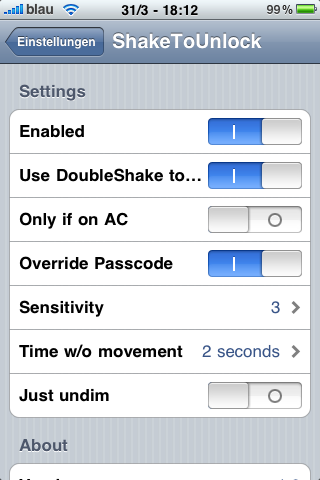 As you can see from the feature list above, the tweak contains a substantial array of possibilities, all of which can be configured from within the Preferences application on the device. One thing which caught my eye is the declaration that Shake To Unlock has a low battery consumption. One thing which always concerns me with certain tweaks is the additional drain they place upon the devices battery. The release notes within Cydia claim that Shake To Unlock requires approximately 20 – 25% of the devices battery per day to function. To me that seems like a quite a severe drain, especially considering the battery issues reported in iOS 5.

Shake To Unlock is available as a free of charge download through the Big Boss repository within Cydia.