The world we live in is a very expensive place where every penny counts, even more so in recent times thanks to the worrying economic climate we find ourselves in. With that in mind, it is imperative that creators of goods and services which are not deemed as necessities go that extra mile to provide consumers with truly exceptional value for money. The problem with that is that one persons definition of value for money differs greatly to another, especially when we are talking about software. A growing trend is emerging where consumers seem to believe software should be free of charge is somewhat concerning when you take into account the days, weeks and months which are put into the design and development of these programs and applications.

While value for money is a topic we could debate back and forth all day, how does free of charge sound? Exactly zero pounds and zero pence is what you will pay for the privilege of using the new Serviio Media Server which has been developed by London based JavaScript developer, Peter Nejedly. Serviio is an entirely free media server which allows multiple types of files to be streamed to what the developer is calling renderer devices. Serviio Media Server is compatible with television sets, Blu-ray/DVD players, games consoles and even mobile telephones as long as they are all connected to the same network.

Serviio has been likened to the popular open source Xbox Media Center (XBMC) platform which has become so popular on jailbroken Apple TV units, but unlike XMBC, Serviio requires only a DLNA device to view all of the content. A great deal of users who require the functionality that a media server provides already have their chosen favorite, so why should they even consider upping sticks and moving across to using Serviio? Well firstly it is gaining some serious traction with over one million downloads and rising daily. Serviio also offers a fairly advanced feature set: 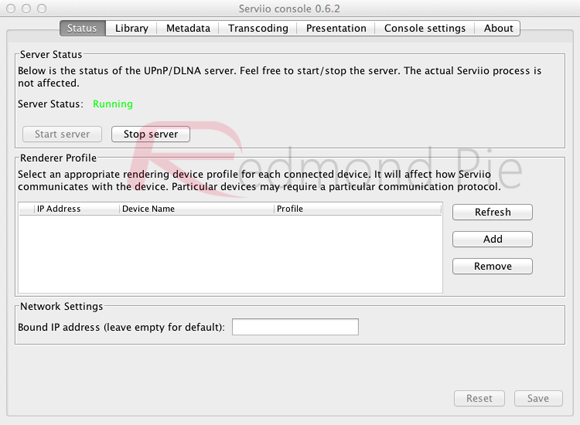 The large adoption of compatible devices as well as the huge array of supported media types coupled together with the fact that it is entirely free of charge makes the downloading and use of the Serviio Media Server a no brainer in our eyes. Continued development and support is provided for this service which makes what is already a professional piece of software even better.