AppSlider For iPhone: Launch Two Of Your Favorite Apps Directly From The Lockscreen

In the last day or so we have heard Apple announce the fact that the twenty fifth billionth application has been downloaded from their official App Store, confirming the application hub as the biggest on the mobile planet. Whilst the statistic clearly shows that iOS users are becoming increasingly active in the App Store, we should also spare a thought for the unofficial, Cydia store, which also turns in some impressive numbers. Cydia is home to some of the finest third-party tweaks and modifications available for an iOS device, and this is being added to on a daily basis.

One of the latest tweaks to land in the Cydia store comes from developer Ron Melkhior and has been given the name AppSlider, which relates to the fact that the tweak makes modifications to either side of the slide to unlock graphic on the device’s lockscreen. AppSlider is likely to appeal to regular users of an iPhone who have one or two applications that they use on a recurring basis. For example, hardcore Twitter users may like to have the Twitter application located permanently on the lockscreen, giving them quick launch access without having to unlock the device first.

The AppSlider tweak essentially gives users the ability to launch custom applications from the lockscreen, which it achieves by minimizing the slide to unlock bar and adding the chosen application icons to both sides of the slider. The tweak comes with its own dedicated preferences panel located within the native Settings application, which is where the two chosen applications can be selected from a populated table view of the installed user apps. Something which I find extremely important in Cydia tweaks, is the ability to toggle the tweak on or off through the Settings panel, which is something that is present in AppSlider. Unfortunately due to unforeseen compatibility issues between third-party tweaks, it sometimes becomes necessary to troubleshoot installations, which is made a lot easier by being able to easily turn the modification off. 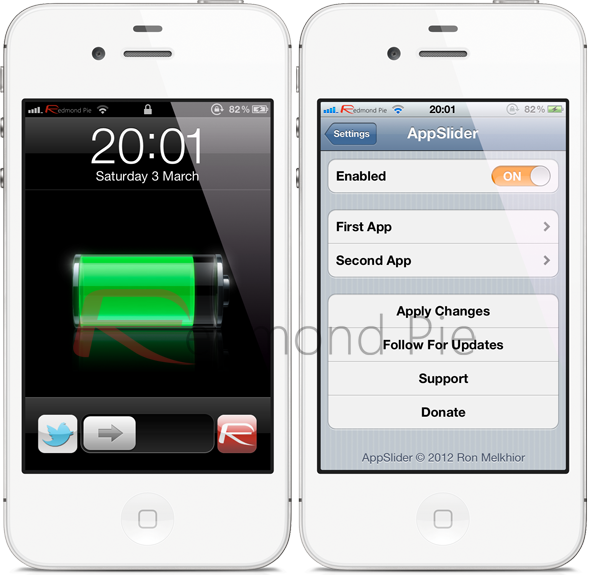 AppSlider is a very simple, but powerful tweak and will definitely appeal to those iPhone and iPod touch users who have a couple of applications which they use on a more frequent basis than all others. The launch of the app is seamless and does not suffer from any sort of lag whatsoever, and for those who are security conscious, the AppSlider tweak respects the passcode lock setting. If a user has a passcode lock set through the Settings application, the numeric keypad will still be presented when the application is tapped, requiring the correct password before proceeding into the app itself.

AppSlider is available from the BigBoss repository as a free of charge download, requires iOS 5, and is currently only compatible with the iPhone and iPod touch.

Of course, you will obviously need to jailbreak your device to install this tweak. For jailbreaking iPhone 4S and iPad 2, you can simply follow our step by step tutorial posted here to jailbreak iOS 5.0.1 using Absinthe on Windows or Mac. Those of you with an iPhone 4, 3GS, iPad 1, and iPod touches can use Redsn0w or Sn0wbreeze to untether jailbreak on iOS 5.0.1.