Sony has been taking advantage of having a captive audience at the SCEJA Conference in Tokyo to make some rather interesting announcements that no doubt immediately captured the attention of PlayStation owners. The Japanese gaming giant has taken the opportunity to not only announce the official name of its PS4 virtual reality system that has been frequently speculated upon, but also introduce a number of new DualShock 4 controllers and accessory panels designed for the PlayStation 4 console.

Sony’s PlayStation 4 compatible virtual reality headset has been on the radar for quite some time, and was previously referred to by its internal name of ‘Project Morpheus‘. Only now has Sony seen fit to provide a few minor details about the innovative headset by deciding that the time is right to reveal its official name: PlayStation VR.

Masayasu Ito, Division President of PlayStation Product Business, provides a little more insight into the naming of the hardware:

The name ‘PlayStation VR’ not only directly expresses an entirely new experience from PlayStation that allows players to feel as if they are physically inside the virtual world of a game, but it also reflects our hopes that we want our users to feel a sense of familiarity as they enjoy this amazing experience.

Sony is keeping extremely quiet about the headset, choosing to keep intricate details close to its chest at the moment. However, there is some good news. Attendees at the SCEJA Conference will be able to try out and interact with PlayStation VR this week. Sony will also be taking the headset on the road as part of a Japanese tour later this month. Passionate PlayStation 4 owners can expect the product to be commercially available sometime in 2016.

Sony has also debuted a number of new DualShock 4 controllers for the PlayStation 4 alongside a new range of hard drive panels that add an air of personalization to the PS4 console. The four new DualShock 4 controllers will come in Gold, Silver, Steel Black, or transparent Crystal. There’s no difference from a standard DualShock 4 other than the aesthetic, and each piece of kit will retail for 6,480 yen, or approximately $54. 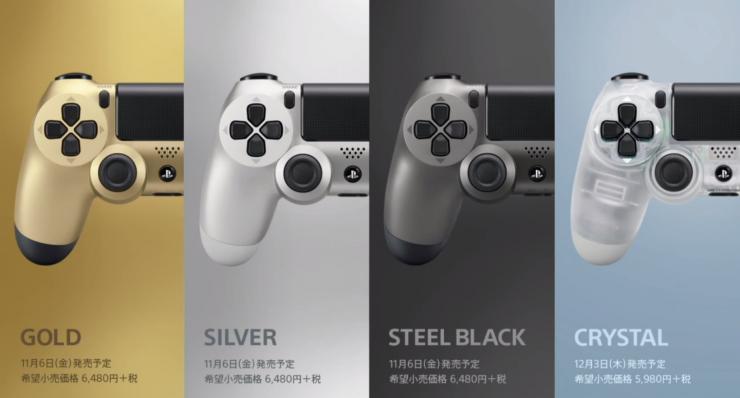 If you’re looking to further the personalized gaming experience then Sony also has a new range of yellow, gold, pink, light blue, red, and purple hard drive panels that add a splash of color to the otherwise fairly plain PS4 console. The panels will launch in Japan on November 6th at around the 2,500 yen mark. That’s approximately $21 to the rest of us.