Western Digital was clearly a believer in the bright future of SanDisk when it acquired the company for an estimated $19 billion back in 2016, and it looks as though that belief was not misplaced.

The American manufacturer of flash memory products has changed the landscape of portable memory by introducing a 400GB microSDXC UHS-I card which it believes to be the highest-capacity microSD card on the market. 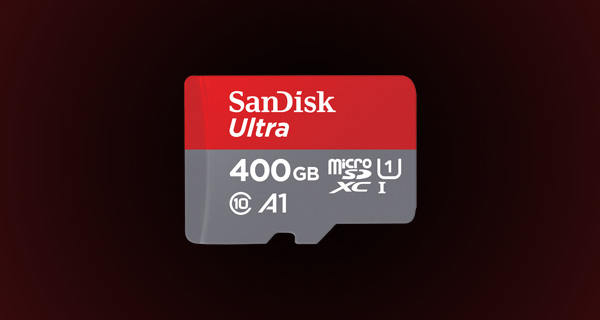 SanDisk has a history of blowing the portable memory game out of the water and taking things to the next level, which is likely one of the reasons Western Digital saw fit to pump billions into the company’s coffers. It was just two years ago that SanDisk introduced a 200GB Ultra microSD card, which at the time seemed extremely impressive for the type of money that it was charging. This latest addition to the product range effectively doubles the capacity of that card.

The desire by SanDisk to double the storage of its largest capacity card has clearly partly been driven by the fact that consumers are now using external storage in a larger array of devices, such as smartphones, cameras, and even drones, as highlighted by Research President Jeff Janukowicz.

Mobile devices have become the epicenter of our lives, and consumers are now accustomed to using their smartphones for anything from entertainment to business. We are collecting and sharing massive amounts of data on smartphones, drones, tablets, PCs, laptops and more. We anticipate that storage needs will only continue to grow as people continue to expect more sophisticated features on their devices and desire higher quality content. We estimate mobile device users worldwide will install over 150 billion applications alone this year, which require a ton of memory on all of our favorite devices.

SanDisk is clearly gearing up for a world where a ton of data is stored across a wide variety of device types. Consumers have long been using cards of this nature in devices like Android-powered smartphones and tablets, digital cameras, and even laptops, but the company now envisages a growing use of microSD cards in drones which are capable of capturing images and 4K videos.

Those use cases clearly call for higher capacity cards, such as this one. For those who are interested, the card is available to purchase now and costs $249.99.