Everyone loves Tesla, except maybe someone with shares in an oil company. From what we’re hearing in reviews and hands-on time, everyone loves the new Samsung Galaxy S6 as well, which is quite the feat considering some of the stick Samsung has received in the past. But what does Tesla have to do with a Samsung smartphone you ask? Well, it’s obvious.

In fact, it’s not obvious at all so we’ll explain it for you. The video that we have embedded here shows a Tesla Model S car – and a very nice one it is too – happily running over a Samsung Galaxy S6 because, well, if you intend on driving over a high-end smartphone you might as well do it with a high-end electric car. Apparently. 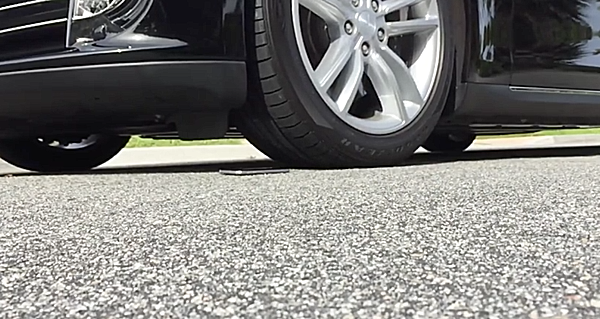 The end result is pretty much as you might expect, rendering the entire thing not just pointless but downright silly, too. Unless the objective of the thing was to show that someone has an expensive car and a fancy smartphone. In which case, job done!

The Samsung Galaxy S6 and Galaxy S6 Edge only went on sale this past week and are already receiving plaudits from consumers and reviewers alike. After years of producing plastic phones, Samsung has gone all-metal this time around and is reaping the rewards. It may have had to drop the removable battery and expandable memory to do it, but we suspect Samsung will be rewarded with higher sales numbers as a result.

Both the Galaxy S6 and Galaxy S6 Edge are available to buy now. Just do us a favor and do your best to resist the urge to drive over one of them. Even if it is with something as lovely as a Tesla.