This Band Can Double The Battery Life Of Apple Watch

The Apple Watch is decent enough on the battery front, but there will always be an accessory or two that will attempt to enhance it even further. Enter – wipowerband, the Apple Watch case that comes with a built-in battery that straps around your watch, nearly doubling the device’s retention on the energy front.

Quite a few accessories had been introduced prior to Apple putting up the its first wearable up for pre-order on April 10th, and given the fervent consumer response, as is evident by the launch stock selling out in just a few hours, we will be seeing even more accessories for the watch down the road. The latest to come in after the wearable’s launch is the wipowerband, aiming to extend the battery on the device with its “250 mAh high density lithium polymer rechargeable battery.” 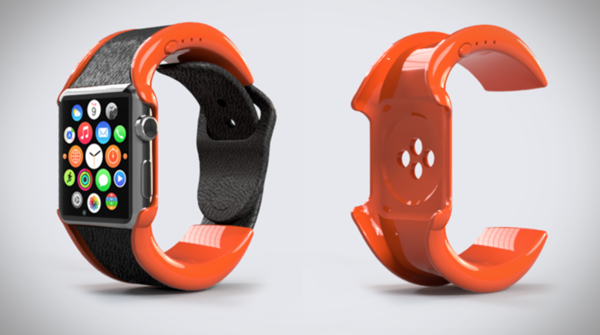 The trouble with this accessory being that the extra power it adds to the battery of the Apple Watch is based on estimates and as such tells us that the product has not been tested with the actual product in question, but then again, this concern can be raised for plenty of Apple Watch accessories out there that came out before the wearable was launched. Like the wipowerband, the Reserve Strap accessory has also drawn on the same purpose of charging the watch on the go, but unlike the wipowerband that wraps around your watch including the band of the device, the Reserve Strap sports its very own band. 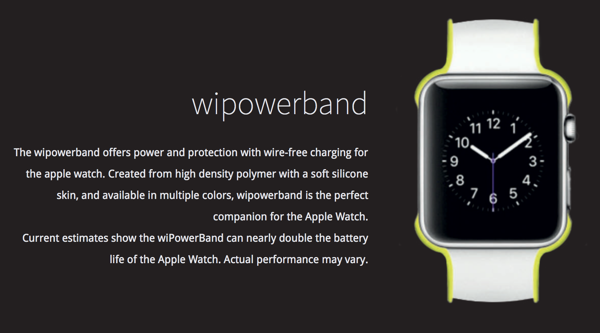 Like the Reserve Strap, the wipowerband also utilizes the MagSafe charger on the back of the Apple Watch, so there’s a good chance that the company will have to approve such products, not to mention that the “Inductive tight couple” charging technology on the wipowerband may not comply with Apple’s charging standards. We could tell you to avoid using non-approved and non-certified chargers or battery packs for use with the Apple Watch, but it’s really down to your own choice.

You can wait for accessory makers to release more products, including those from more reliable manufacturers, but if you can’t wait and wish to give the wipowerband a go with your soon-to-arrive Apple Watch, the contraption can be ordered for $89 and $99 for the 38mm and 42mm case sizes, respectively.

Wipowerband will be available in sky blue, red, pink, black, and green colors. You can pre-order the accessory from: wipowerband.com