At Mobile World Congress towards the end of February, Samsung showcased its latest and greatest Galaxy S5 smartphone to the world. Like the launch of the Galaxy Note 3 back in September, the Korean outfit also added a smartwatch to proceedings, and after a generally negative response to the initial Galaxy Gear, the company will be hoping that the Gear 2 fares a great deal better. To whet the appetites of fans excited about the forthcoming releases, Samsung has delivered a hands-on video offering a walk-through of the Galaxy S5, as well as a further clip demonstrating the numerous bells and whistles of the Gear 2 and Gear Fit. Check them out after the break!

The smartwatch industry has grown dramatically over the past year or so, a shift that can largely be attributed to the Pebble. What began as a Kickstarter idea has well and truly thrust the world of wrist-worn gadgets into the spotlight, and with fitness-related devices like the Nike+ FuelBand also making waves, it’s no surprise that Samsung has come through with the Gear 2 and Gear Fit as it tries to improve upon the original Galaxy Gear. 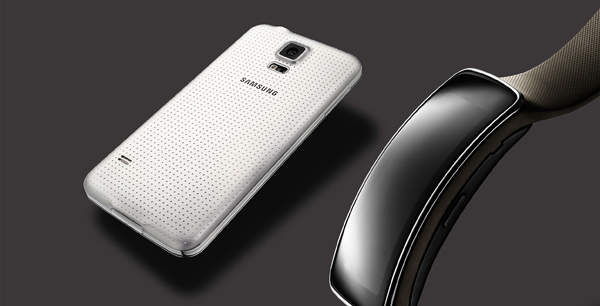 High cost, poor functionality and terrible battery life all beset the Galaxy Gear, preventing it from making its mark, but with a bunch of improvements having been made this time around, Samsung will be hoping that it can transfer some of that smartphone industry acclaim and convince consumers that the Gear product line has something to offer.

Even though we’ll be keeping a close eye on the Gear 2 and Gear Fit, we’re most excited for the Galaxy S5, which, as well as arriving in a shiny gold color configuration, also offers a neat fingerprint sensor. As we’ve seen, the 16-megapixel rear-facing camera takes some nice snaps, and with 4K video shooting to boot, the device will definitely appeal to photography aficionados.

We’ve seen quite a lot of the new device now, but if you want to take another inspection, check out Samsung’s very own hands-on demonstration below. And hey, if you’re looking to join the hordes of folks jumping on the smartwatch bandwagon, then the Gear 2 and Gear Fit is also embedded for your viewing pleasure.