Samsung has upped the ante in the mobile device storage world by introducing a new range of products that could spell disaster for current microSD card technology.

The newly introduced Universal Flash Storage (UFS) products are tailored towards the “digitally-minded” consumer, and exist as a high-capacity, high-performance range of memory cards that promise lightning performance which is normally associated with solid-state drives. And all of this in a tiny little package designed for extreme portability. 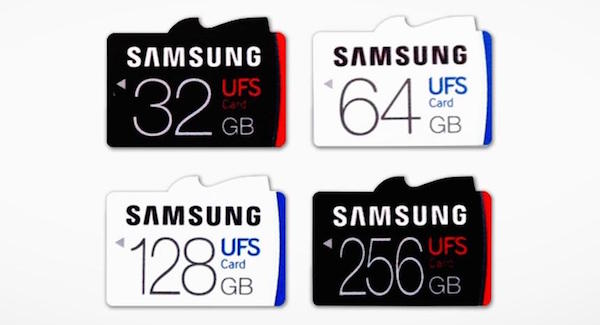 Mobile storage has never been more important than it is today. More and more consumers are regularly walking around with smartphones, digital cameras, and tablet computers, and are more accepting of integrating those devices into their everyday lives.

As technology progresses, manufacturers of those devices are making them increasingly more powerful, meaning that we are walking around with relatively small devices that are capable of recording and potentially storing extremely high resolution video and photos. Of course, that means some devices ultimately need an additional upgrade from a storage perspective.

Samsung’s new storage solution will range from 32GB to 256GB in capacity, with the South-Korean company looking to fill the void in that particular market with the Universal Flash Storage cards that not only offer higher capacities than before, but that will also be capable of transferring large amounts of data back-and-forth between card and device in record time.

And if you’re wondering about what exactly we mean by record time, then you’ll be glad to know that the UFS specs suggest read speeds of up to five times faster than current top-of-the-line microSD card, or up to 530MB/s.

Our new 256GB UFS card will provide an ideal user experience for digitally-minded consumers and lead the industry in establishing the most competitive memory card solution. By launching our new high-capacity, high-performance UFS card line-up, we are changing the growth paradigm of the memory card market to prioritize performance and user convenience above all.

The cards sounds great and will hopefully deliver on their promise, but it may be a while until they are in mainstream use. It’s highly likely that Samsung’s upcoming smartphones will all add support for UFS cards, but it’ll be a lot longer until mainstream devices from other manufacturers adopt support for these cards that come with a different chip layout to microSD cards.