Pushed Out By Apple, What’s The Future Like For Google Maps On iOS?

One of the expected outcomes of WWDC’s opening keynote event was the removal of Google Maps from iOS, with it being replaced by Apple’s own in-house solution that not only gives the Cupertino firm more control over the maps experience, but also knocks Google out of its stride on one of the world’s most popular smartphones and, let’s not forget, tablets.

As WWDC unfolded, it was clear that those waiting for a maps announcement were not to be disappointed. Apple did indeed remove Google Maps from iOS, and it did indeed replace it with its own software. We lost Google Street View in the shakeup, but we gained some interesting new features along the way, the new turn-by-turn navigation we have all been waiting for, for example.

The real reason for the change will probably never be known. Did Apple want to simply have as much control as possible over the entire experience, giving it the ability to change things at will and improve others without needing to consult Google first? Did Apple simply want to give Google the smackdown by pulling it from iOS, leaving Android as the only major smartphone platform sporting the search giant’s maps?

No matter the reason, the end result is the same, and we doubt Google is happy.

So what now for Google Maps on iOS? One potential course of action is for Google to release Maps as a standalone app via Apple’s App Store. Google already has apps available via the App Store, so the addition of Maps would make a certain amount of sense, assuming Apple would let it in. 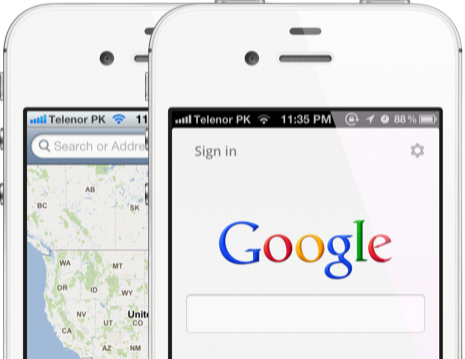 While the possibility that Apple would reject Google Maps is a real one, simply because Apple is not a company that likes to play by the rules, we suspect that it would indeed get through Apple’s vetting process. The thing is, if Apple’s own system is as good as it appeared during the WWDC keynote, why would anyone want to replace it with Google Maps? Other than Street View, what is really missing?

Not a lot, really.