We all had a day or so to absorb all of the information which Apple felt they needed to give to us during the opening keynote presentation at this year’s Worldwide Developers Conference in San Francisco. The announcement surrounding the new line of notebooks as well as the included features of OS X Mountain Lion was great, but the real excitement came from getting that early insight into what they have in store for us with iOS 6, the next major release of their mobile operating system.

While the excitement is still buzzing around the iOS loving community, it is always worthy to take a step back and remember that when it comes to the release of heavily updated software like this there is always going to be a a number of causalities who are cast out into the abyss. In this case, as you might expect, the casualties are those users who have opted to stick with older generations of Apple hardware, such as the iPhone 3G or third-generation iPod touch.

It would be easy to hope that it would be a simple and clear-cut case of ‘this device will support iOS 6’ and the rest won’t, and while that is partly true, when it comes to iOS 6; Apple will allow a decent set of their devices to run the firmware, but not all devices that are compatible will be able to power all of the included features. For those iPod touch users out there, if you are running anything older than the fourth-generation unit then unfortunately you are out of luck with iOS 6 only being able to be installed on the 2010 released fourth-gen device.

The most supported iOS device seems to be the iPhone, with installation support going all the way back three generations on the iPhone 3GS, iPhone 4 and the current model, which is the iPhone 4S. As mentioned earlier, not all iPhones will get all iOS 6 features, with things like VIP Mail requiring the iPhone 4 or above and the new Maps Flyover feature only being available on the iPhone 4S and new iPad. Owners of the second-generation and the new iPad will be able to look forward to the final public release as Apple have deemed their devices iOS 6 worthy enough, although iPad 2 owners won’t be able to enjoy cellular data FaceTime access.

The complete list of features which will be, and will not be available on different devices are as follows, as pointed out by Apple: 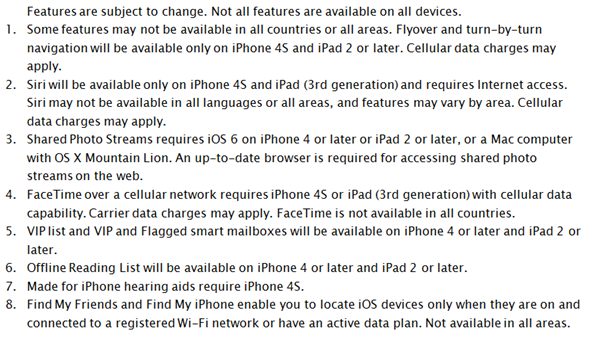 We are still a long way off from Apple releasing a public build of iOS 6 and although it is possible that the device compatibility list could change, it remains extremely unlikely. However, the features available on each piece of hardware don’t appear to be set in concrete at this stage, and could be subject to changes in the future.