Apple, perhaps more so than any other tech company, tries its utmost to shave as much unnecessary baggage from its product range through generations, and although we’ve seen some significant downsizes in recent times – the Retina MacBook Pro, for example – sometimes the reductions can only be achieved a little at a time.

Much has been made of the new nano-SIM tray, which will mean only the readable part of the SIM is present, removing that excess plastic. It’s only been a couple of years since Apple introduced the micro-SIM, which cut the size of the original mobile SIM card down by almost half, but the Cupertino is now looking to push on and remove anything deemed unnecessary.

A report over at NoWherElse.fr (via 9to5Mac) appears to show the next iPhone’s new nano-SIM design, which is said to have surfaced from China where the next iPhone is / will be produced. A minor detail it may be in the grand scheme of things, and although the new tray will be an invaluable space-saver in devices where every square millimeter counts, it’s sure to provide a few headaches for those having only just made the switch to the micro-SIM.

I, like many, trimmed my full-size SIM down to fit in the micro tray – an intricate process that I wouldn’t personally recommend, but when I first purchased my iPhone 4S, the last thing I wanted to do was wait for a day or two for the proper, smaller SIM to arrive. If, as it does appear, Apple chops the micro-SIM down even further to the nano-SIM for the next iPhone, I’m sure there’ll be plenty of confused, bemused consumers wondering what the fuss is about.

NoWhereElse’s images also show the smaller home button we’ve already touched upon in an earlier report, with Apple looking to save as much room as possible for the larger display, expected to measure in at around 4-inches. 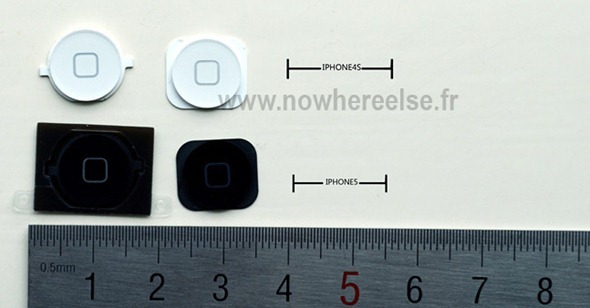 We’re certainly excited about the prospect of the new iPhone, and with so many new hardware features (NFC, 4G LTE, large display, and a possible quad-core processor), the unofficially dubbed “iPhone 5” is shaping up to be the very best version to date.