Nuance’s Nina For iOS And Android Announced, Hopes To Take Voice Assistants To The Next Level [VIDEO]

Voice recognition wasn’t a new invention when Apple introduced Siri towards the end of last year, but it certainly caused a stir within the mobile industry. Packaged in iOS 5 for those lucky enough to own the Cupertino company’s iPhone 4S, much was made about a technology scarcely touched upon in an industry seemingly apt for it.

Since then, we’ve seen the other major players in mobile space latch on, with Google, Samsung and Microsoft all offering snippets of their own iterations, and although Siri will be enhanced come iOS 6, the technology is still in infancy.

Siri’s voice assistant capabilities stem from Nuance, a company specializing in voice dictation and recognition, and now the company has set the blogosphere abuzz with Nina, voice-based collection of technologies which aim to target the customer services market. 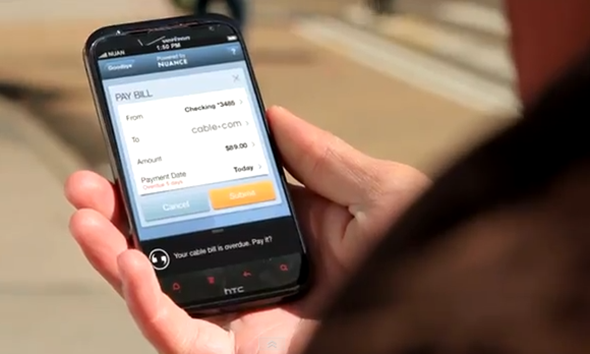 Hitherto, the likes of Siri, S Voice and Google Now have shown how one can easily find out the weather, get sports results, and perform other search-based functions using the power of the voice, but Nina looks to take things up a notch by integrating its technology into apps related to fields such as banking, insurance, and other big corps.

Nuance would offer a Nina SDK and development help to said companies, and the service would include three main features; a biometric voice-unlock for logging in, basic voice recognition, and "contextually aware" natural language understanding, guiding users through multiple steps.

At present, many use their smartphones and tablets to keep a check on their finances, and Nina could theoretically allow one to make payments through voice commands.

At present, Siri et al are pretty one dimensional. The monotony of listening to the same voice can become irritating, but Nuance will also give consumers the ability to create "personas," like Siri, with a little personality added in to entice customers to interact with it.

At this point in time, there will still be big question marks over whether Nuance can sharpen its system enough for the rest of us to trust the voice technology with things like banking. As I write this, Siri – the closest thing I have to assessing the current state of voice recognition – cannot tell me what day the closing ceremony of the Olympics will fall on, so would I want it sending transactions to and from my bank?