BattSaver For iOS Can Double The Battery Life Of Your iPhone

Although being able to dramatically change the way Apple’s mobile operating system works by performing a jailbreak on the device is extremely beneficial and can result in a positive way to the user, some iOS device owners have also stated that they have noticed significant downsides to jailbreaking. One of these reported downsides is battery drainage, and while it may be true in some instances that running multiple intensive substrate tweaks can lead to degraded battery life, users of non-jailbroken devices on any version of iOS 5 have also noticed less than adequate battery performance.

Step forward the BattSaver package, by well known developer and friend of the jailbreak community Xvolks, and backed by famous iOS jailbreak developer Pod2g. Cydia contains a number of battery managing tweaks which seem to be cleverly worded to give the impression of power improvement, but actually, what they do is just allow users to see what is draining the battery, view the maximum and current capacities and a few other bits and bobs that isn’t exactly useful to the user. BattSaver on the other hand makes the bold claim that it can double the battery life on the jailbroken device and provide a distinct and noticeable improvement to the user. 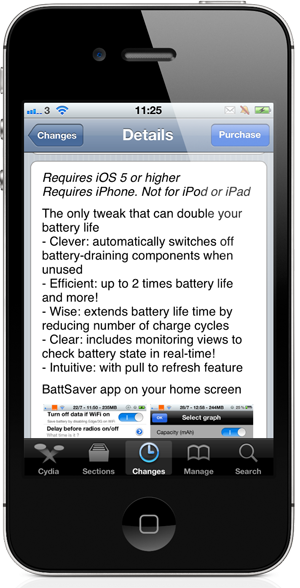 The power of the BattSaver package comes from its behind-the-scenes code that is intelligent enough to monitor the system and automatically switches off anything that is not being used and could be a potential battery drainer. You would actually be surprised at how many different things lie dormant on an iOS device, but still feel the need to consume battery life. The main selling point of this package is the efficiency which it claims to provide to the user. Given the fact that an iPhone has an almost endless amount of uses due to the ability to download additional apps from the App Store, battery life is imperative to that functionality. No battery means no usage, and that is why being able to double the battery life is such a valuable commodity.

BattSaver also comes with built-in power strategies that define how aggressively the device should cling on to that precious power. Ranging from normal to custom, each strategy has a different set of criteria which involves turning off all radios when not in use, as well as setting certain power saving mechanisms to kick in when the battery level reaches a certain percentage. If you have a jailbroken iPhone that is in dire need of some power conversation, then the BattSaver tweak is most definitely for you. 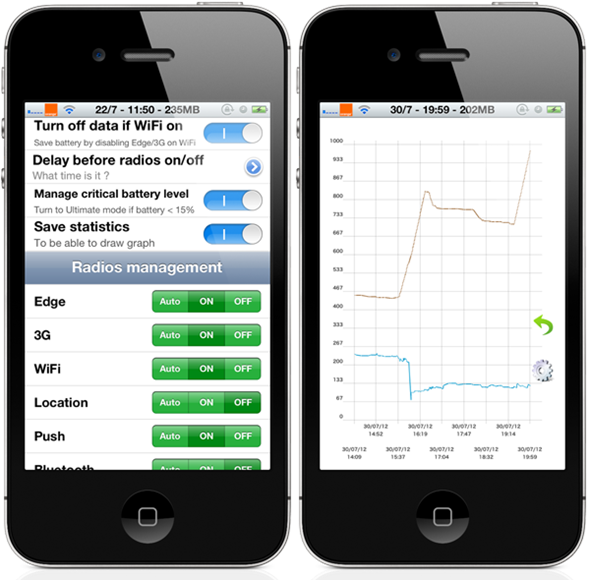 BattSaver is available for $2.99 from the BigBoss repository, and requires a jailbroken iPhone with iOS 5 or above installed. This package is not compatible with the iPad or an iPod touch.

Be sure to check out our iPhone Apps Gallery and iPad Apps Gallery to explore more apps for youriPhone and iPad.