Now that the big PUBG Mobile 0.5.0 release is out and gamers on both iOS and Android are able to get in on the action, many people have understandably been wondering just what is new in this latest update.

You weren’t alone, and thankfully official patch notes are now out for the English version which have cleared things up nicely. As it turns out, plenty has changed.

You can check the full release notes below, but there are a couple of highlights that jump out at us. The first of those is a new local quick team feature which allows users to enter a 6-digit code in order to join friends in-game quickly. Another improvement is the addition of a new shop, allowing gamers to preview and purchase new outfits and items.

Fans will also not the addition of a new desert map, known as “Miramar,” bringing with it new vehicles and weapons for players to discoverer.

This new release is already out of date though. Chinese users have been playing PUBG Mobile version 0.6.1 for a few weeks now, and testing of version 0.7.0 beta is already underway as well. That all being said, this new update is the first time that version 0.5.0 has become available worldwide, meaning that those of us not currently residing in China can also play along.

Check out the complete patch notes for version 0.5.0 below: 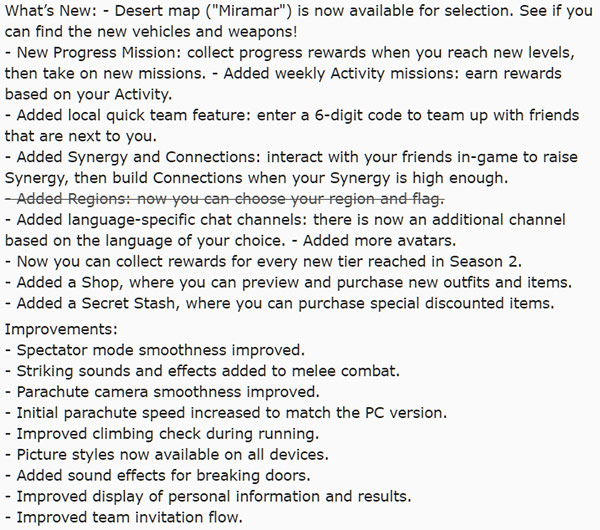