Microsoft’s Project Scorpio has been on the agenda for quite a while prior to today’s final specification reveal. Those individuals with a keen and vested interest in the world of video-gaming will have already had a fairly decent understanding of what Microsoft was hoping to achieve with Scorpio, but will have been blessed with additional insight from today’s in-depth look into the architecture and technical specification of the hardware. 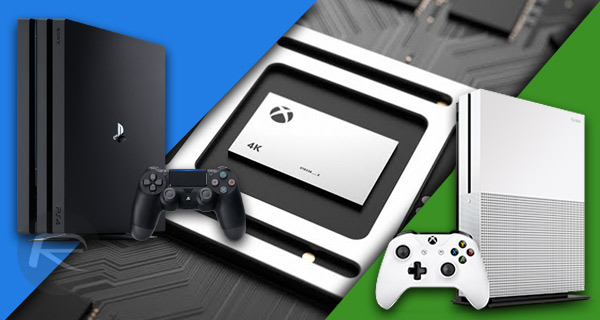 Scorpio is slated for release later this year, but when stacked up against Microsoft’s existing Xbox One S and Sony’s PlayStation 4 Pro, just how does it compare purely on specification level?

If we step away from performance for a second, and focus on visuals, product design, or basically how the console looks when stripped of its box, then we find ourselves in a little bit of a predicament. We may know of the raw graphical and computing power of Scorpio, but we don’t yet know what the product will look like. What it will feel like. Or what it will look like alongside other pieces of tech in our homes. We know that both Microsoft and Sony have iterated on their console designs with the “S” and “Pro” versions of the Xbox One and PlayStation 4, but we really can’t make final judgments until we see what Scorpio will bring with its visual package.

Hardware, performance, and power is where Microsoft’s next beast really comes into its own. With the Xbox One S being in our lives since August 2016, and Sony’s Pro version of PlayStation 4 with 4K gaming capabilities following shortly after in November of the same year, we are already well versed in what they can offer. From a CPU perspective Xbox One S offers 8 custom Jaguar cores clocked at 1.75GHz, whereas Sony’s PS4 Pro attempts to go a little further with the a similar CPU integration, albeit clocked slightly higher at 2.1GHz. Scorpio on the other hand blows both out of the water with its entirely custom 8 x86 cores clocked at a 2.3GHz, a ridiculous and unheard of speed for a video-game console.

And then there’s the graphical capabilities and accompanying memory to take into consideration. Both Xbox One S and PlayStation 4 are packing an extremely capable 8GB of GDDR5 RAM, but with Scorpio once again taking the lead by shipping with 12GB onboard to maximise the CPU and GPU performance.

All-in-all, it’s very difficult to equate specifications on paper to real-world performance. With Xbox One S and PlayStation 4 Pro you know exactly what you are going to get, whereas Scorpio is an entirely unknown entity. Albeit it an extremely impressive one on paper. We’re looking forward to find out more about this as time goes on, but in the meantime you can check out the side-by-side spec comparison chart below. 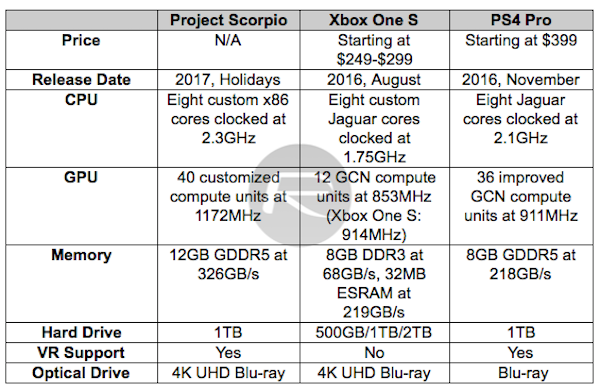