Prepare To Install iOS 11 Beta The Right Way, Here’s How

Here’s a guide on how to prepare to install iOS 11 beta on your iPhone, iPad or iPod touch device the right way.

With Apple’s opening keynote of WWDC 2017 today, it’s time to start thinking about prepping those iOS devices ready to install the initial beta of iOS 11. As we always do at this time of year, we have a guide to how you can prepare your hardware ready to receive iOS 11. So what are you waiting for, let’s get started! 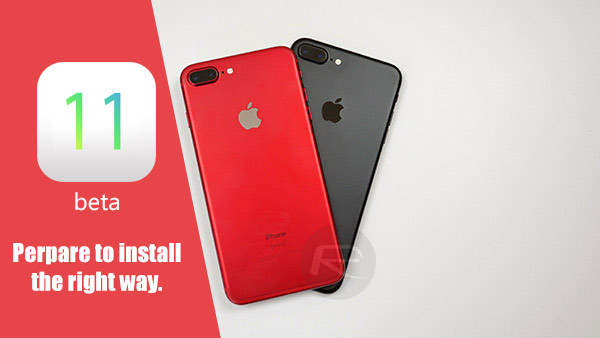 Sign up on Apple Developer Program: First and foremost, you are going to need to have the necessary access in order to get your hands on the initial iOS 11 beta. In order to do that you will need to be registered as a developer through Apple’s Developer Program. You can head over to developer.apple.com to start that process using an existing Apple ID.

Backup your device using iTunes / iCloud: Depending on your perspective, this is potentially one of the most important aspects. Installing any iOS beta, but more specifically the first beta of a new major version, could potentially come with teething issues and problems. For that very reason, it’s very important to make sure that the device has been put through a full iCloud or iTunes backup in order to be able to restore back to that stable version when needed. It’s very important to do this beforehand as any backup made later on iOS 11 will not be compatible when the device is downgraded back to iOS 10.x.

Save SHSH2 blobs for iOS 10.x using Prometheus: This will not be a mandatory experience for a lot of users, but it’s definitely something that’s worthwhile doing and takes a little effort. It immediately means that those individuals moving across to iOS 11 can downgrade back to an earlier version of iOS should a jailbreak become available for that version. You can walk through that process of savings the necessary blobs here: How To Save SHSH2 Blobs For Prometheus Downgrade Using TSS Saver.

Restore to latest public release before updating to iOS 11 beta: Get yourself on the latest public version of iOS in order to give yourself a solid foundation for the upgrade to the beta version. That latest version is currently iOS 10.3.2 at the time of writing, and you can grab the download to use within iTunes for restore from here: Download iOS 10.3.2 Final Version IPSW Links For iPhone And iPad.

Wait for Apple to release iOS 11 beta: Once the device is primed using the advice above, then it’s a case of sitting and waiting until the iOS 11 beta is released by Apple. This will likely come immediately after the WWDC keynote is over, but we will, of course, keep you informed and let you know as soon as the beta is available for download, including guides on how to install it.