Poll: iPhone 6s or iPhone 6s Plus? Which One Are You Getting?

The iPhone 6s and jumbo-sized iPhone 6s Plus have finally been unveiled after what feels like months of intense speculation and conjecture.

As expected, Apple has once again chosen to try and appeal to the widest audience possible by introducing the 6s range with the same 4.7-inch and 5.5-inch offerings that were brought to market with last year’s iPhone 6. Additionally, following on from the precedent set last year, this latest generational iPhone release once again sees the two devices separated by rather marginal technical differences. The decision on which device to buy will really only come down to one major deciding factor; do you want to go as big as possible at 5.5-inches or keep it at 4.7-inches? 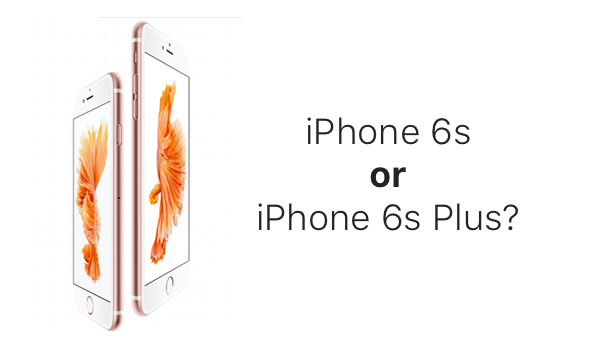 Both devices will be served up in the same color variations, Space Gray, Silver, Gold and now the new beautiful Rose Gold offering. Both options offer the same three storage capacities: 16, 64 and 128GB. Both the iPhone 6s and iPhone 6s Plus come with a Retina HD display with integrated 3D Touch technology. They’re also both powered by the same Apple A9 chip with 64-bit architecture that has the same embedded M9 motion coprocessor built-in and 2GB of RAM. The only difference lies in screen size (4.7 inch vs 5.5-inch), screen resolution (1334 x 750 vs 1920 x 1080), OIS (for photos and videos) in camera and battery (1715mAh vs 2750mAh).

The real question is whether or not you, as a consumer, are going to invest your financial resources into the smaller iPhone 6s or the larger iPhone 6s Plus? Or, might you decide that you only live once and purchase both pieces of kit? We’re sure Apple would prefer consumers to take that approach.

One very important thing to consider, which is something that consciously or subconsciously plays a part in all of our purchasing decisions, is the price of the thing that we’re buying. Where possible, Apple has maintained the pricing points that were outlined with the iPhone 6 and 6 Plus last year. However, in certain countries, such as Canada, Australia, and certain European territories, Apple has been forced to raise the price of the hardware due to the fluctuations in the US dollar against the local currency. If you’re from one of those affected countries, will that make you give the iPhone 6s a miss and opt for something a little less pricey?

With pre-orders set to go live tonight on September 12 at 12:01am Pacific / 3:01am Eastern time, there’s not much time left to decide if you want to be amongst the first to get your hands on the new device.

We’ve included a very quick poll below and we’d love to hear your thoughts and mindset on the device that you are or are not going to get.