Scarcely does a major software update release without bringing problems for at least some users, and whilst not everybody would consider OS X Mountain Lion as “major,” it certainly presented many MacBook users with something of a headache.

Battery consumption is a deal-maker-or-breaker for most of us shopping around for new gadgets, and even if something purports to offer a host of great features, without enough juice to keep things ticking over smoothly, the only thing it’s adept for is the proverbial doorstop.

Upon upgrading to the first drop of Mountain Lion (10.8), some users found their MacBooks would drink up battery like a fish, and although the MacBook Pro’s form factor prevents owners from slipping under the door in dismay, the MacBook Air was beginning to find itself a new occupation.

Jokes aside, the battery life issues were no laughing matter, with reports floating that the OS X Lion to OS X Mountain Lion upgrade caused a 38% decrease in battery retention. The recent release of OS X 10.8.1 improved battery life over the original Mountain Lion release, but still didn’t bring things back up to speed with OS X Lion.

Apple is apparently working to amend the issue once again, and TheMacObserver has perform a pretty thorough set of tests on the latest build (12C35) of OS X 10.8.2’s battery compared with every iteration of OS X back to Snow Leopard 10.6.8. 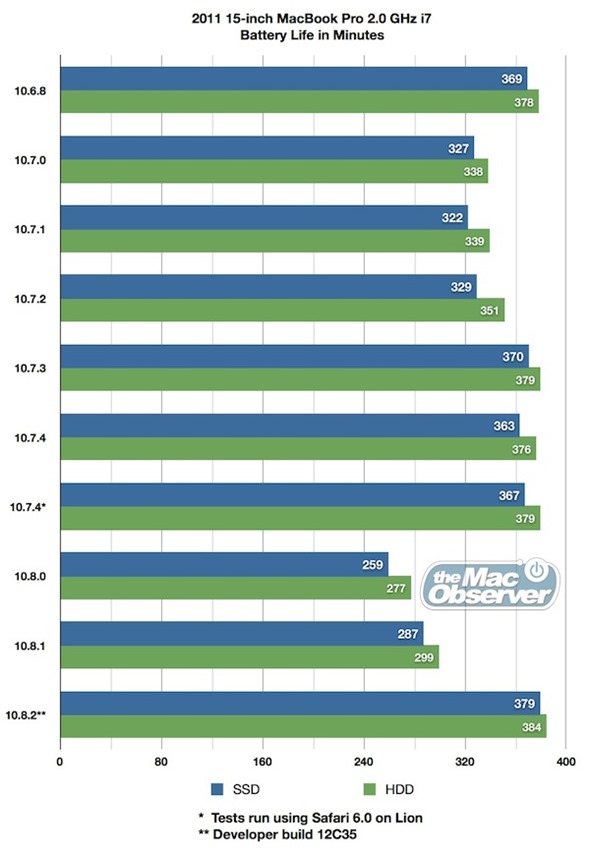 As you can see, the difference between OS X 10.7.4 and OS X 10.8 is very significant – a reduction of over 100 minutes. The 10.8.1 upgrade offered a twenty minutes or so, but as you can see from the 10.8.2 tests, things should return back to normality once the upgrade finally releases.

Having upgraded my MacBook Air to Mountain Lion a couple of weeks after it dropped, I cannot say I noticed any significant differences, although I did only use 10.8 for a matter of days before the update was released by Apple.

Have you had such problems with your MacBook? If so, don’t fret – we’ll have details and download links of the official OS X 10.8.2 release as soon as it’s seeded by Apple.

Until then, make sure you pack your charger with you for those long trips.