Nokia Working On Its Own Smartwatch Effort According To Patent Filing, Gets Concept Video

Samsung may have been the first major company to deliver a smartwatch in the form of Galaxy Gear, but it certainly won’t be the last, and with Apple also rumored to be working on a purported "iWatch" device, it would appear that Finnish outfit Nokia has similar ideas. Not only do we have some interesting patent filings that the company has just passed on to the United States Patent and Trademark Office, but there’s also a neat video of the concept, offering a rough idea of how the technology might work.

It’s a pretty fair assessment that the Samsung Galaxy Gear has yet to take the market by storm. In fact, due to its fairly limited capability, uninspiring functionality and high price, not many consumers have rushed out to make the purchase. One suspects that until there’s sufficient competition and choice within the market, there’s not going to be a way to gauge the value and general usefulness of the wearable gizmo, and although the Pebble Smartwatch did show that the market is at least there, it’s going to be quite a while before such devices become commonplace. 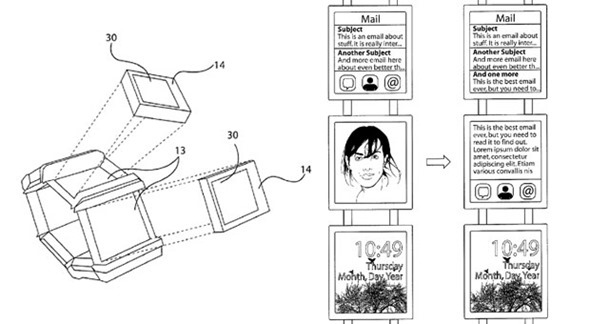 Nokia, as most of you will know, recently sold a large chunk of its business over to Microsoft, but in spite of this, the rumors of exciting announcements continue to be rife. As well as a tablet and phablet, it now looks very much like a Nokia smartwatch could be in the offing, and in actual fact, it does look rather exciting.

The Galaxy Gear’s lack of dimension has been well documented, but as per the patent filings and video, it looks as though Nokia might be looking to take things to the next level. It may, for example, work on the idea of a segmented, divided display, any of which could rise to prominence depending on the orientation or angle of the display.

According to Kent Lyons, one of many individuals behind the device, it’s currently codenamed "Facet," and although it remains to be seen whether this product, or indeed anything similar, will ever make it to production, it’s hard not to relish the prospect of Samsung, Nokia, Apple and others doing battle in yet another potentially lucrative field.

Thoughts on the subject?