Nintendo’s Wii was a roaring success, at least for the first few years of its life. Sell-outs the world over and an ability to draw so-called non-gamers into a market that was previously dominated by hardcore fans had Nintendo’s coffers overflowing. When it came time to put the Wii out to pasture and replace it with something a little more modern, the Wii U was created.

Unfortunately for Nintendo, the Wii U has failed to capture the imagination in the same way that its predecessor has, which as a result has left it floundering in an industry where powerhouses like the Xbox One and the Sony PlayStation 4 are likely to eat its lunch and then force it to shine their shoes. If you did actually buy a Wii U though, there might be a use for that big tablet-like controller that you’ve got gathering dust in the corner of the room. If you’re one for a spot of hackery, that is. 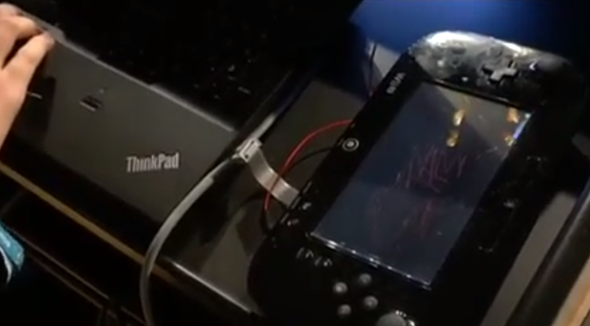 Presenting at the 2013 Chaos Communications Congress event, two clever chappies have shown off something that is rather awesome, if unlikely to make that much of an impact on our lives. If you’ve ever wanted to be able to play PC games on a Wii U’s controller though, you’re going to be a little bit giddy. A little bit too giddy if you’re a complete nerd.

During the presentation, available to watch on YouTube now, we’re shown a PC running the Dolphin emulator loaded with a Zelda Wind Waker ROM. That’s not the best part though. The really impressive thing is that we then see the game being pushed over to a Wii U controller, complete with surprisingly good video reproduction and controls. The screen may only be 854 x 480 resolution, but it’s certainly better than nothing and more than adequate for playing games running through an emulator, that’s for sure.

It’s entirely debateable how useful this really us, but what isn’t debatable is the cool factor. If you’ve ever wanted to play PC games on a Wii U controller instead of being stuck in front of a monitor, then you’ll want to check out the video. Skip to the 47-minute mark for the demo.

Overall, what do you make of this? Do you think the Wii U is a good enough contraption to be used to play PC games? Leave your thoughts in the comments section below.