New details have emerged courtesy of Apple blog iLounge suggesting the next iPhone will not follow the rumored teardrop design, but instead follow a more conventional form factor seen in both the iPhone 4 and 4S.

The device, which nobody seems sure will called, is reckoned to finally be breaking the small-screen mold, and will follow the lead of many Android units by increasing the screen to a more agreeable four-inches. The long-standing argument as to why Apple has kept the screen at 3.5 while the likes of Samsung and HTC knock on the door of 5-inch displays, has been that the average thumb can only cover that diameter, thus allowing the iPhone to be used in one hand where others require two hands for operation.

That said, as I mentioned in the list of things Tim Cook’s company should consider with the next iPhone, the screen is in need of augmentation, and if the notably assured iLounge report rings true, it seems those using the Cupertino company’s next smartphone will have more screen real estate to play with.

In terms of the overall design, the new iPhone is said to be longer and thinner than the iPhone 4S, with guesstimated measurements of 125mm by 58.5mm by 7.4mm. This would render the device a full 10mm longer than the current flagship device, while also being around 2mm svelte. Citing sources, the report says Apple will add a flat metal panel at the center of the rear of the device in an iMac-esque fashion. 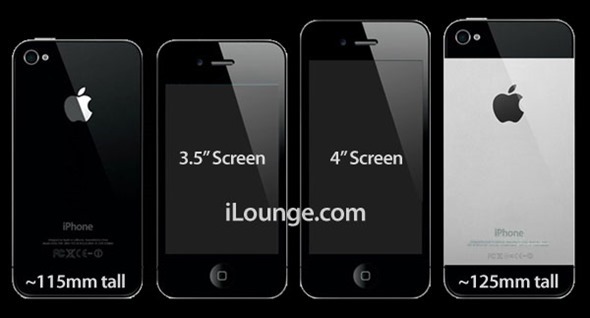 The overall design is thought to partially consist of Gorilla Glass 2, which is, as you would expect, more robust than the glass used and seen on earlier iPhones. This will be great news for those nursing a device with a hairline fracture or two, for despite Apple’s boasts of increased durability with the iPhone 4(S), many still find their devices shatter after minor bumps and drops.

The aspect ratio will also be changing, since the new pixels will be added to the top and the bottom of the current display, while the width is likely to stay as is. This will obviously mean quite a lot of work for third-party app developers, who will need to produce titles in different resolutions to support old and new.

The new, downsized dock connector is also expected to debut with the new iPhone, and will be around half the size of the current connector while also containing fewer pins. All subsequent Apple devices will begin using the more compact connector, which, like the micro SIM, saves on internal space.

To be honest, the report seems credible, and nothing noted by iLounge seems particularly outlandish. While believing every single source-citing report often eventually leads to a brick wall, it certainly offers food for thought.