Is Apple about to finally refresh the AirPods? That appears to be the case after new AirPod model numbers were added to the Bluetooth Special Interest Group’s regulatory database a few days ago on November 1st.

The new model numbers are A2031 and A2032 which are believed to correspond to new left and right AirPods. Both of the new devices have been able to complete the Bluetooth Qualification Process.

Current AirPods carry the hardware version number REV1.0, with the new model numbers having the REV1.1 designation which would suggest we can expect an updated set of Bluetooth and W1-equipped earphones in the relatively near future.

Rumors have had new AirPods being imminent for months now, and while we thought they may arrive during the September iPhone event or the October iPad event, neither proved to be the big unveiling. It’s now likely that the updated AirPods will make their appearance via press release.

We don’t know for sure what the new AirPods will offer, but existing rumors have hands-free “Hey Siri” support being an almost certain addition. When the AirPower charging mat was still on the horizon a new wireless charging case was also expected to be part of the AirPod update, but that isn’t listed in the new Bluetooth database so all bets are off there. If a wireless charging case does arrive, we would hope that would suggest AirPower is still alive and kicking, somewhere deep within Apple. 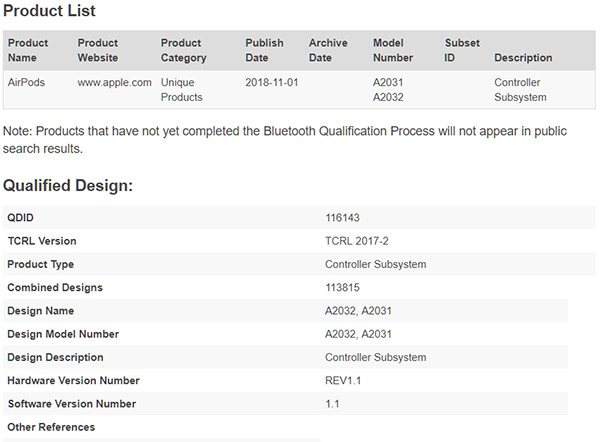 The original AirPods were added to the Bluetooth database on November 20th 2016 ahead of a launch on December 13th of the same year. If that pattern repeats itself, we may not have too long to wait before getting new AirPods in 2018.