The iOS 7 firmware has only just been released, and with millions of iPhone, iPad and iPod touch users having already rushed to check it out, the security holes within this fledgling release are really beginning to add up. We’ve already heard about an iOS 7 lock screen bug that allows a potential intruder to check out personal information such as email and photos, and now, a similar issue has been found on the new-look lock screen allowing any number to be dialed / called without access to the home screen. The emergency call feature, which has naturally been put in place to facilitate emergency calls on any device, is, and not for the first time, the culprit here, and below, you’ll see a video sent to Forbes reporter Andy Greenberg that demonstrates how very easy it could be for someone to rack up a huge phone bill. 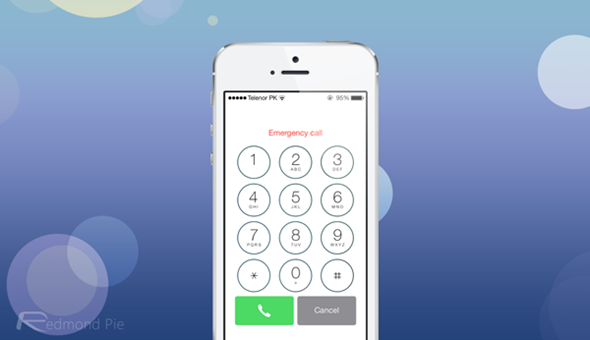 With iOS 7 having only been around for a couple of days, we would expect there to be one or two teething issues, but when you’re talking about significant holes that genuinely threaten the integrity not only of iOS, but of security to those it serves, then we have a bit of a problem. A big problem in fact, if you look at it from as many perspectives as you can.

In tapping the Emergency call button on the lock screen, it has been revealed that one can call any number by simply typing it in before repeatedly tapping the green “call” button shown thereafter. It’s worth noting that while this worked with an iPhone 5 running iOS 7, it would seem that the iPhone 5s and iPhone 5c, which received the new update to iOS 7.0.1 soon after its release, is not susceptible to this new bug.

Still, after the previous revelation and now this, Apple will probably be working hard to ensure these kinds of issues are amended as quickly and efficiently as possible. The company has long since prided itself on its reputation for secure software, and so one would suspect that a 7.0.1 or 7.0.2 update is not too far off for devices other than iPhone 5s and iPhone 5c.