We may be waiting for Samsung to share its vision for the Galaxy S5, but that isn’t stopping people from coming up with their own concepts of what the next big thing from the company will be like. The latest concept comes from Rozetked, with the idea being that the new handset would be some sort of amalgamation between an iPhone 5s and whatever Samsung has up its sleeve for the next Galaxy phone.

This being a device that takes cues from the iPhone 5s, the device in the video looks somewhat like an overly large iPhone. The Galaxy S5 as it is depicted here features a flat back that will look eerily familiar to iPhone owners, but it’s around the front where the iPhone influence becomes clear.

Where the iPhone 5s sports the fingerprint sensing technology Touch ID, this concept sees the Galaxy S5 feature something called ‘Reach ID.’ Instead of having the sensor inside the home button only, this concept has the entire Galaxy S5’s screen be a fingerprint sensor, meaning users can unlock their device by touching pretty much anywhere on its face. Apple has been rumors to be working on offering just that feature, though getting a fingerprint sensor into something that needs to be clear like an iPhone screen obviously has its challenges. 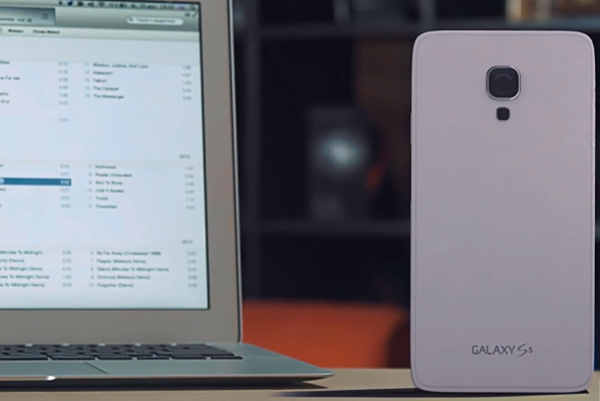 Reach ID also features a Moto X-like voice control element, with the device able to be woken up with a phrase that could be pre-configured by the user. We’re still a little dubious about how useful such a thing would be in the real world though, especially considering how sparingly we use things like Siri already.

The video ends with a screen showing the expected specifications of the Galaxy S5. With a 5.2-inch screen with a 2560×1440 resolution, there’s no doubt it would be an phone that would demand attention. A 64-bit Exynos Octa CPU and 3GB of RAM would no doubt make things nice and snappy, too.

We’re hoping to hear from Samsung soon enough, so we’ll at least know what we will be able to buy when the real Galaxy S5 hits the market later this year. If it’s anything like what this concept depicts though, we’re sure it’ll be popular.

Thanks, Khoroshev for the hat tip!