When it comes to mobile apps, the people in the know generally agree that keeping it simpler is the way to go. In fact, one widely used design model for developers is the Keep It Simple Stupid (KISS) method which encourages designers and developers to make their creations as simple as possible. Mobile devices function differently from their desktop or notebook counterparts as they don’t have as much screen real estate to take advantage of and need to function perfectly through a touchscreen interface.

When it comes to both the official App Store and Cydia development for iOS devices, developers are often guilty of over-thinking things, believing that the more they cram into a piece of software the better value it will provide for potential customers. In normal circumstances; that theory may prove true, but in the world of mobile technology the opposite is generally the case. Simplicity and elegance with a simple and intuitive user interface is what tends to make a more popular mobile app.

With that in mind, the developer of a new tweak known as NCSettings has managed to create a very functional blend of simplicity and elegance. NCSettings is a tweak for jailbroken iOS devices running iOS 5 or above which allows users to place a number of commonly used system settings directly in Notification Center for quick access. It effectively provides the same functionality as the famous SBSettings tweak to populate Notification Center, but NCSettings has its own minimalistic approach. 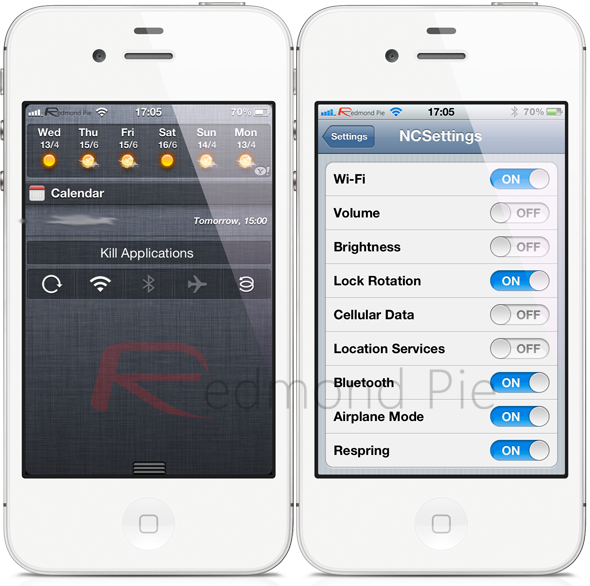 When installed, NCSettings doesn’t provide any additional SpringBoard icons. It does however create a dedicated preferences panel through the native Settings app that allows users to toggle which settings they want to use within Notification Center. At the time of writing, the tweak contained support for nine different system settings including toggling Wi-Fi on or off, Bluetooth on or off, locking the device’s rotation and being able to repsring the device. When Notification Center is invoked, NCSettings manifests itself through a very simple and native looking interface that allows users to simply tap the required icon to toggle the settings between the on or off state. Depending on which setting is used, a nice little animation is displayed on the tweak’s UI to confirm the action has been carried out.

The NCSettings Notification Center bar has space for five individual icons meaning that if all nine are activated through the preferences panel the user will need to scroll either left or right to see the additional options. NCSettings is available on the ModMyi repository as a free of charge download for devices running iOS 5 or above.