Motorola has stayed good to the word of their Vice President of Product Marketing, by updating the "ways to buy" page on the Moto X website to indicate that a Developer Edition of the device will be "coming soon". It was only a matter of days ago that Punit Soni informed the smartphone loving public that Developer Editions of Motorola’s flagship device would be arriving imminently, and the website now reflects that promise from the company’s executive.

Motorola certainly isn’t shying away from getting in on the Developer Edition trend that has seen a number of competing companies release additional variants of their devices. South Korean giant Samsung have already released a version of their flagship Galaxy S4 device, which through form and function appears exactly the same as the standard model, but comes with the ability to unlock the bootloader. Motorola has obviously recognized the value in providing such a variant and are thrusting the Moto X down the same path.

Not wanting to be outdone by the competition, Motorola is also giving an entirely custom look and feel to the developer version of their fantastic flagship device. The Moto X Developer Edition will not only come with 32GB of onboard storage and an unlocked bootloader, but it will also be built with a new two-tone external fascia that looks fantastic. The front of the device will be presented in beautiful black gloss with the rear cover having a white hatched effect and the words "DEVELOPER EDITION" scrawled across the bottom. 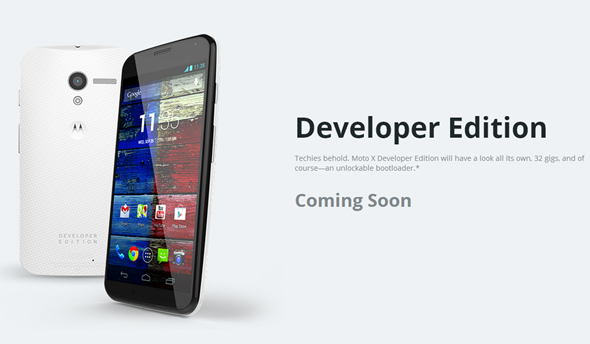 The updated Moto X website makes it abundantly clear that the Developer Edition is aimed solely towards "techies" and it even comes with a lovely little rider warning about the unlockable bootloader feature of the device. Anyone wanting to go down the bootloader unlocking route should be more than well aware that it has warranty implications, but Motorola is keen to explicitly state that "unlocking your DEVELOPER EDITION’s bootloader voids all warranties and may cause serious harm to your device." Thanks for that warning, Motorola.

There are currently no pricing details available for the Moto X Developer Edition but with the Samsung Galaxy S4 dev edition hitting $649 it isn’t likely to be cheap.

So, are you going to get a regular Moto X, or want to hold off for a bit and get a Moto X Developer Edition device instead?