Apart from all the great features which iOS 7 brings to the table, it also includes a bunch of cool APIs for accessory makers. Starting from iOS 7, manufacturers have full control over the throttle and can make full-fledged iOS 7 compatible game controllers which can be paired up with an iOS device over Bluetooth for gaming.

Recently, we reported that GameCase had officially announced its first ever iOS 7 compatible controller for the iPhone and iPad, something which arrived hot on the heels of a leaked Logitech game controller from September.

Now, another leak has taken place, and this time it is from MOGA. It is dubbed as the ‘Ace Power.’ The new controller, we have to say, looks absolutely stunning in terms of design and overall features which it will have on offer when it is eventually released.

According to the leak, which comes courtesy of Evleaks over at Twitter, the game controller will be compatible with iOS devices falling under the 4-inch display category. The supported devices include Apple’s latest flagship device, the iPhone 5s, the colorful iPhone 5c, the iPod touch fifth-generation and the now-discontinued iPhone 5.

The leaked controller features two analog sticks at the front, along with a standard direction controller with four buttons, and follows a design pattern which is somewhat similar to the Xbox One’s controller, except it’s more blocky. 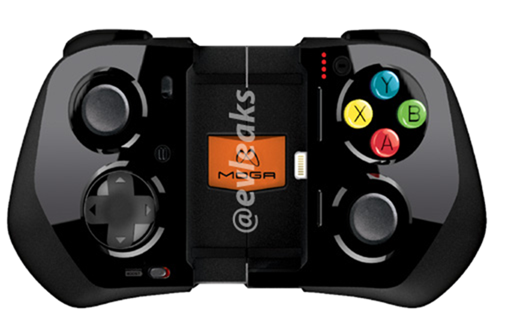 But wait, there’s more! The controller also features a mighty 1800mAh built-in battery that will ensure that your device never runs out of juice once you dive into the world of gaming. Hence the word ‘Power’ in the accessory’s name.

On the rear, there are four buttons in total, which also follow the same arrangement pattern as that of a PlayStation or an Xbox controller. The buttons are named as R1/R2 and L1/L2, according to the leaked image.

The information at this time regarding the accessory is somewhat sparse. Apart from a couple of images, we have nothing at all. No release date, and nothing official from MOGA itself. But considering how frequently we’ve started to see such leaks, it’s great to see that accessory makers are focusing on this part of mobile gaming really seriously.

What do you think of the leak? Would you buy it once it hits those store shelves?