Microsoft’s Xbox one isn’t a bad looking console, but it’s not something that we would call nice to look at. It’s pretty inoffensive, and that’s about all you can hope for when you’re a big black box that sits underneath a TV 24/7. Or is it?

Microsoft has long been one for releasing special edition consoles going all the way back to the original Xbox. Consoles have been released with different color schemes to promote new games, for example, with fancy controllers often making for some unique looks even if some of them haven’t quite been to our taste. Remember those Star Wars-themed Xbox 360s? 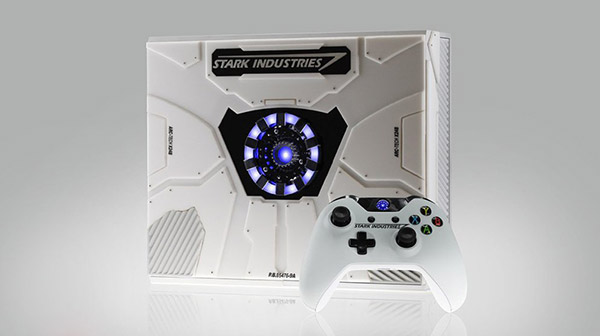 Microsoft is at it again, this time to celebrate the release of a movie, with Captain America: Civil War hitting theaters soon. As part of the hype, Microsoft has made a handful of special edition Xbox One consoles that have been built to look like they were created by the famous Stark Industries of Iron Man fame. With a customized top plate and glowing “arc reactor” centrepiece, this Xbox One will certainly get people’s attention when they see it.

Microsoft hasn’t let the controller untouched either, with the Stark Industries logo plastered all over it and a mini arc reactor making up its power button.

None of this changes how the particular Xbox Ones work or behave, but if special edition consoles are your bag, then there are far worse than this. Unfortunately, you can’t buy one – not yet, at least. It seems there have been only three made, with Xbox France giving them away. You never know, though, Microsoft may eventually end up selling these things to anyone who wants one.

Check the promotional video out for a look at what an Xbox One might look like if designed by Tony Stark himself.