Microsoft Reinvents Its Online Email Offering By Launching Outlook.com, Here’s How To Sign Up Now!

Hotmail has been around for what feels like forever, and alongside Gmail it has been one of the most used online email services on the planet. Today Microsoft gave its own email service some competition, with the new Outlook.com preview set to run alongside Hotmail, at least for now.

With Microsoft very much aware that users have fallen out of love with Hotmail for one reason or another, the company has chosen to build a fresh offering rather than to try and tack parts on to the existing Hotmail, leaving us with two competing services from the same company. We would expect Hotmail to go away eventually, with Outlook.com being left to go up against Gmail all on its own. 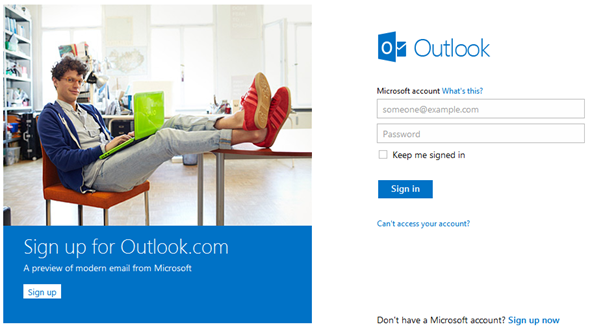 As of today, Outlook.com is wide open to the public, and with unlimited storage and 7GB of SkyDrive space thrown in too, getting yourself a good @outlook.com email address right now may be a better idea than you’d have previously thought.

If there is one thing that immediately jumps out at you when signing in to Outlook.com, it’s the Metro-style interface. We have a colorful, tile-like interface that has more than a little of the Windows Phone about it. Well, Windows Phone and Windows 8 we should probably say, but you get our point. It feels light-years ahead of what users of Hotmail will be accustomed to, and looks similar to the minimalist experience that Google went for with the latest iteration of Gmail.

Despite the name, Outlook.com resembles the new Metro interface more than the Outlook app that many will be using in their work environments. That’s nether a good, nor bad thing in our eyes, but it is noticeable that Microsoft didn’t want to simply recreate the Outlook web access interface for Outlook.com, which is interesting to us. Whether that’s a good thing will depend on your feelings on Metro, but it’s a choice Microsoft needed to make.

The best thing to do if you want to get the lowdown on Microsoft’s Outlook.com is to give it a try for yourself. With signups now open to everyone and the service being free, there really is no reason to not get your account claimed right now before someone else does. Have a play and make your own mind up.

The sign-up process is rather simple, simply point your browser to Outlook.com and click on “Sign Up” at the bottom left of the page as shown in the screenshot below:

Now, simply fill in all of your required details and click on “I accept” at the bottom, that’s it, you’re done!

That said, does it offer enough to pull users away from Gmail? Time will tell.