Although Microsoft didn’t stipulate an Office 2013 announcement would be arriving today, the blogosphere has been abuzz with regards to today’s announcement from the Redmond company. After a big banner showing the new Office logo was placed outside the San Fran venue, it was down to company CEO Steve Ballmer finally lifted the lid on its Office 2013.

Although the software maker’s market-leading productivity suite is perhaps never at the forefront of the main technology news, there has, over the course of the last year, been plenty of speculation about the next iteration of Office (including a leaked beta build), and with Microsoft fans and PC users adequately excited about the prospect of Windows 8, the next in line was naturally going to be Office 2013.

The latest version of Office features what Microsoft bills as "an intuitive design that works beautifully with touch, stylus, mouse or keyboard across new Windows devices, including tablets". With a new Metro interface heading our way in Windows 8, Office was always going to be given a significant visual update, as has proven to be the case.

Office 2013 features the usual suspects: Word, PowerPoint, Outlook, OneNote and Excel, all of which have been dramatically improved. PowerPoint in particular seems to have been singled out for a makeover, and packs in a new Presenter View which shows, at a glance, current and upcoming slides, total presentation time, along with speaker notes. 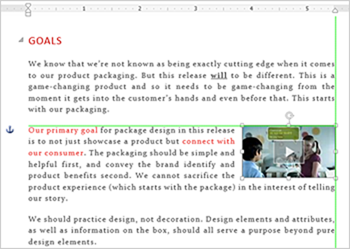 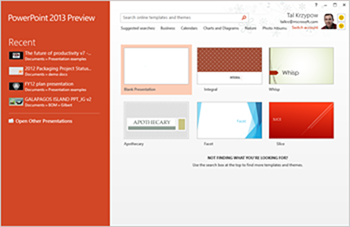 There’s a big push on SkyDrive – Microsoft’s cloud service – as you might expect, and with Google and Apple also competing for a crown currently worn by Dropbox, it’s going to be interesting to see how everything falls into place. Steve Ballmer was particularly buoyant about the new release’s close relationship with SkyDrive, talking of his company’s "bold steps" in "deliver[ing] unparalleled productivity and flexibility for both consumers and business customers."

Similarly to the manner in which iCloud works, everything is in sync. Once you’ve signed in to Office, all of your settings, recently used files, templates and dictionary entries will be available across all devices, and you can easily, say, start a project on your desktop before continuing on your Surface – the syncing is automatic and smooth. 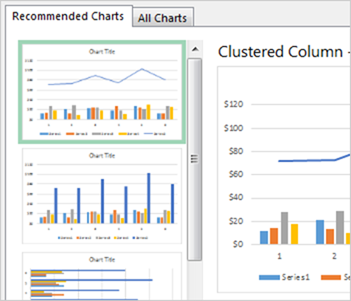 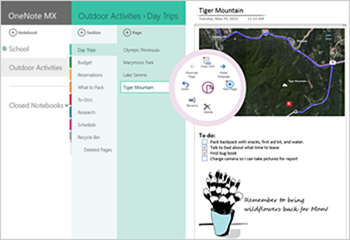 The new Office will also be available as a cloud-based subscription service, and those subscribing will automatically receive future upgrades along with access to extra cloud services such as Skype world minutes and additional SkyDrive storage. Speaking of Skype, Microsoft’s 12.5 billion dollar purchase last year, anybody subscribing automatically yields 60 minutes of Skype world minutes each month, which is a great added incentive for anybody to use the popular VoIP service.

As well as the new design of Windows, Office 2013 will also be the first version pushed out to mobile devices. The Microsoft Surface, the company’s unreleased tablet/ultrabook, will be at the forefront, although Microsoft also plans to deliver Office to iPad and Android tablets, giving developers plenty of headaches in maintaining Office’s staunch reputation. With Office 2013 responding fully to touch, the tablet implementation should be something of a breeze, and along with the new Inking feature first demoed at the Surface announcement, this is sure to be the best version of Office released to date.

From a social point of view, Microsoft has put in a lot of work, and as well as the expected deep Skype integration, there’s People Card, which offers an integrated view of each and every one of your contacts. Meanwhile, Yammer offers a secure network for businesses, and in integrating with both SharePoint and Microsoft Dynamics, appears to offer a nicely-rounded service.

Steve Ballmer also too the time out to discuss three new Office 365 subscription packages, consisting of Home Premium, Small Business Premium and ProPlus. Home Premium is made for "families and consumers," and features 20 GB of SkyDrive along with 60 minutes of Skype, while Small Business Premium is, as the name implies, made for small businesses. As well as industry-standard e-mail and shared calendars, there are various tools for websites and HD web conferencing. Finally, Office 365 ProPlus is the all-singing edition, and packs a bunch of tools for those looking for advanced features (i.e. larger businesses).

As a side note, those running ARM-based Windows 8 devices will see Office (Home and Student 2013 RT) as standard, and yes, this does include the Microsoft Surface.

The Customer Preview means you can test Microsoft Office 2013 out for yourselves right now. The last preview the Redmond company released was of Windows 8, which went down particularly well with users, so here’s to hoping Office also delivers the goods.

It stands to reason that you'd want to test it on a Windows 8 machine, although this isn't a prerequisite.

Microsoft Office 2013 Customer Preview can be downloaded from the official link here.